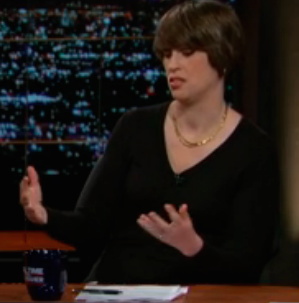 Rising (and sometimes falling) Republican strategist Liz Mair had expressed some interesting opinions about the War on Drugs on the April 24 edition of HBO's Real Time with Bill Maher.

The Libertarian-minded Mair wasn't so surprised at the blockbuster news that nearly every examiner in the FBI Laboratory's microscopic hair comparison unit gave flawed testimony over more than a two-decade period, including 32 death-penalty cases. Acknowledging it was "obviously a horrible situation," Mair added, "It's the government. We don't instinctively trust them with a great deal."

Responding to Maher's statement that the US, with 4% of the world's population, incarcerates 22% of the prisoners worldwide, Mair noted that we've locked up "a bunch of people who have put there for doing very minimal nonviolent things. You look at pot convictions....This is what makes people feel that we're going a good job of being tough tough on crime because they look at the numbers, but it's not substantiated in any way, shape or form."

If Mair, a former online strategist for Rand Paul and Carly Fiorina, is an augur of things to come for the Republican party, liberals might find some GOP allies on ending the War on Drugs. But what else will we have to swallow: privatized police forces or prosecutors?

Meanwhile, 35 Congressional Republicans joined California Libertarian and former Reagan speechwriter Dana Rohrabacher in voting to allow VA doctors to recommend medical marijuana. Sadly, the amendment failed by only 3 votes as 8 Democrats voted against it, including Joe Kennedy III, whose cousin Patrick (a former Ambien addict) is banging the anti-marijuana drum with his group SAM.
Posted by Tokin Woman at 8:23 AM