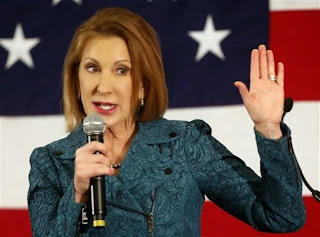 UPDATE: Fiorina has now said, "Drug addiction should not be criminalized" and has come out for states' right to legalize.

Carly Fioria has announced she’ll seek the Republicans nomination for President in 2016.

Named Fortune magazine’s “Most Powerful Woman in Business” in 1998, Fiorina took the helm of HP but failed to produce promised profits and was forced to resign. With a huge influx of her own cash, Fiorina won the Republican primary for Senate in California in 2010, challenging Senator Barbara Boxer (who recently co-sponsored the federal CARERS Act to legalize medical marijuana at the federal level just after announcing she will retire).

During her Senate race, Fiorina said the she opposed Prop. 19, which would have legalized adult use of marijuana in California, because “sending billions of dollars in new tax revenues to Sacramento is exactly the problem…because Sacramento—and Washington, DC—have a spending problem and will continue to spend the money we send them.”

Fiorina's announcement video (they have those now) took aim at Hillary, her opposing queen on the fast-filling chessboard. Also announcing today was Dr. Ben Carson, a neuroscientist not near as hot as Carl Hart who still quaintly believes in the gateway effect; expected in by the end of the week is Clinton nemesis and fellow Arkansas homeboy Mike Huckabee.

Fiorina may have been brought in to dilute any progressive shift on Hillary by Vermont Senator Bernie Sanders, who co-sponsored the States' Rights to Medical Marijuana Act and voted against mandatory drug testing. His entry into the race prompted President Obama to joke that we could have another “pot-smoking socialist” in the White House.

Hillary is being pressured to go progressive on other issues. Her speech on racial disparities in our criminal justice system, where she said, “It's time to end the era of mass incarceration. We need a true national debate about how to reduce our prison population while keeping our communities safe,” was a welcome surprise to many and showed some of the old Hillary stuff.
Posted by Tokin Woman at 12:18 PM