The Queen of Sheba's Spices: Was Cannabis One?


The biblical Queen of Sheba, who also appears (unnamed) in the Quran and is claimed by the Ethiopians as theirs, famously brought gold and spices to King Solomon, circa 950 BC. But what exactly did she bring and where was she from?

Two ancient Yemeni peoples, the Mineans and the Sabaeans, were involved in the lucrative spice trade. Some archaeologists think the Queen of Sheba was a Sabaean from the Semitic civilization of Saba (1200 BC–275 AD) in Southern Arabia, now Yemen.

The inscription on a wooden sarcophagus of 264 BC from Egypt now in the Cairo Museum shows it contained the body of Zayd’il bin Zayd, a Minaean trader who “imported myrrh and calamus for the temples of the gods of Egypt.” Researcher Sula Benet argues that in the earliest Greek translations of the Old Testament, "kan" was rendered as "reed," leading to the erroneous translation as "calamus" for "cannabis."

Modern scholars still cannot pinpoint the origin or species of many ancient spices—for example, cinnamon—and they find it strange that myrrh is not among the names of incense inscribed on South Arabian incense burners. Ldn from these artifacts is translated as ladanum, and Qlm identifies with calamus, also known as scented reed, which Pliny described as having "a specially fine scent which attracts people even from a long way off,” according to Queen of Sheba: Treasures from Ancient Yemen (St. John Simpson, ed.).

In the oldest Sabaean inscriptions originating from the oasis of Marib, five deities are invoked, the most important being Athar, “behind whose name one recognizes the Babylonian Ishtar.” Athar was associated with the morning star (as was Ishtar). “The Sumerian herb called Sim.Ishara’, ‘aromatic of the Goddess Ishtar,’ is equated with the Akkadian qunnabu, ‘cannabis.'” (Erica Reiner, 1995, quoted by Chris Bennett in Entheogens and the Development of Culture, John Rush ed.) 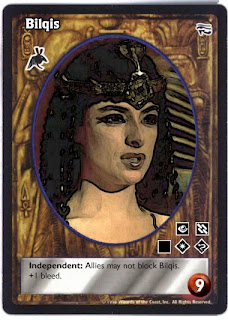 Islamic legends of the Queen of Sheba (known as Bilqis) have a strange plot in which Solomon polishes the palace floor so that he can see the Queen’s legs, which were reputed to be the legs of a donkey. First-century AD author Josephus Flavius calls the Queen Nikaule or Nikaulis in his Jewish Antiquities.

The Testament of Solomon, a Judaeo-Christian work dated between the first and third centuries AD, mentions Empusa under the name Onoskelis, which also means “donkey-legged woman.” The Testament, supposed to be the writings of the legendary King himself, says that he and Onoskelis were quite close and that she took an active part in the construction of the temple of Jerusalem by producing hempen ropes.

This role is similar to that of the ancient Egyptian goddess Seshat, who was associated with the female Pharaoh Hathshepsut (1508–1458 BC) and “stretched the cord” made of hemp in temple-building rituals. In ancient Egyptian, Sheba means "star" or "seven," a number associated with Seshat, “She of the Seven Points” who has a seven-pointed leaf in her headdress. Wikipedia says: "In Egypt, beginning in the 18th dynasty, a Semitic goddess named Qudshu ('Holiness') begins to appear prominently, equated with the native Egyptian goddess Hathor. Some think this is Athirat/Ashratu [Asherah/Ishtar] under her Ugaritic name." Hathshepsut was from the 18th dynasty.

Solomon’s temple was dedicated "for the burning of the incense of sweet spices before him" (2 Chronicles 2:4). He built a temple to Asherah, which was later torn down by Josiah, as described in Kings 23:13.

Flavius identifies Sheba as "the woman who ruled Egypt and Ethiopia." Some think her name Nikaulis is derived from the Egyptian goddess Neith by way of Hathshepsut, and that The Queen of Sheba was Hathsepsut herself or one of her descendants. Sheba’s Ethiopian name is Makeda and was derived from Hathsehpsut’s throne name, Ma’at-Ka-Re, honoring the goddess Ma’at, the Queen of Heaven, a moniker for Asherah or Ishtar.


UPDATE 10/15: I was informed by a DJ in Jamaica that the Rastas sing about the Queen of Sheba bringing ganja to King Solomon.

She is included in the book Tokin' Women: A 4000-Year Herstory.