Cecily is Strong at the Correspondents' Dinner 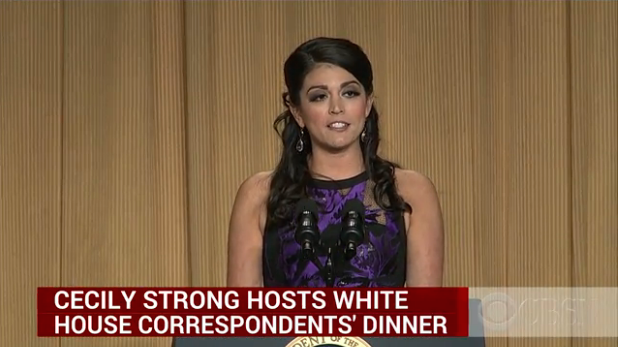 SNL's Cecily Strong, who hosted this year's White House Correspondents' dinner last night, told some good jokes, like, "I'm not going to try and tell you politicians how to do politics...That would be like you guys telling me what to do with my body. Can you even imagine?"

The 31-year-old comedienne got a round of applause after asking the journalists in the crowd to raise their hands and say, "I solemnly swear not to talk about Hillary's appearance, because that is not journalism." She added, "Also Cecily Strong looks great tonight."

Strong mock-defended the Secret Service, calling them, "the only law enforcement agency that will get in trouble if a black man gets shot."  She told Obama, "Your hair is so white now, it can talk back to police." (He laughed heartily at that.)

Strong got down to the drug war with the joke, "This year Obama supported putting women on money, as opposed to the DEA agents who prefer to put money on women.” She also brought up Chris Christie’s belief that marijuana is a gateway drug, asking, “so like a bridge to other drugs, and he wants to shut that bridge down?”

Strong joked that she was the first heterosexual woman in 20 years to host the event. Paula Poundstone was the first solo female host in 1992, and Elayne Boosler hosted the following year. Wanda Sykes hosted in 2009. According to Wikipedia, "Until 1962, the dinner was open only to men, even though WHCA's membership included women. At the urging of Helen Thomas, President John F. Kennedy refused to attend the dinner unless the ban on women was dropped."

One of Strong's recurring characters on SNL is the pseudo-activist "Girl You Wish You Hadn't Started a Conversation With at at Party" who says things like, "Newsflash: Orphans are twice as likely not to have parents."

Meanwhile, Obama's "Anger Translator" from the event, Keegan-Michael Key, recently demonstrated with partner Jordan Peele Why Ganga is So Much Better than Coffee.
Posted by Tokin Woman at 8:37 PM