Nabataean Incense and the Goddess Al-Uzza 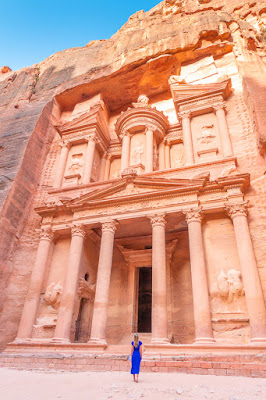 Watching the series Sacred Sites of the World, I learned of the city of Petra in modern-day Jordan with its Nabataean Temple of the Winged Lions where the goddess Al-Uzza and the Egyptian goddess Isis were likely worshipped. This would make it yet another ancient site where incense was burned ceremonially to the goddess.

The Nabateans (300 BCE to 106 CE) were Arabian nomads from the Negev Desert who "amassed their wealth first as traders on the Incense Routes which wound from Qataban (modern-day Yemen) through neighboring Saba (a powerful trade hub) and on toward Gaza on the Mediterranean Sea."

One of a trio of Goddesses with Al-Lat and Manat, Al-Uzza was the supreme mother goddess, considered by some to be the Nabataean equivalent of Aphrodite. Like Ishtar, she is the Goddess of the morning and the evening star, and like Asherah she was associated with lions. The Goddess standing on a lion is a theme found at an ancient Judahite shrine where, it was recently discovered, frankincense and cannabis were burned at its altars.
Anthropologist Sula Benet theorized that the biblical incense kaneh bosm meaning "aromatic cane" was cannabis, mistranslated as "calamus" in the modern bibles. A 2008 study noted that frankincense (resin from the Boswellia plant) is psychoactive and has antidepressant qualities. And a recent article compares myrrh's effects to marijuana's. The Wise Men of the Bible brought frankincense and myrrh along the Silk Road, another ancient trade route that trafficked in spices and medicines, among other commodities.
Much of the Nabatean kingdom was looted following invasions, and much of its herstory may be lost. But more and more, the story of the ancient goddesses and their connection to cannabis is being pieced together (see links in this article for more).
Posted by Tokin Woman at 8:31 AM