Women of New Administration To Lead on Marijuana Reform?


As Kamala Devi Harris,  our reigning Tokin' Woman of the Year, was sworn in as our first female Vice President, it was a banner week for progressive females.

Pennsylvania's top health official Dr. Rachel Levine was announced as the Biden/Harris administration's pick for assistant secretary of health. Levine, a pediatrician, would become the first openly transgender federal official to be confirmed by the U.S. Senate. 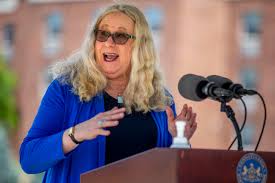 Levine has earned praise for her handling of the COVID crisis, and for managing the roll out of legal medical marijuana in Pennsylvania. Pittsburgh NORML director Patrick Nightingale commented, "Dr. Levine has worked hard to implement and steward Pennsylvania's highly regulated medical cannabis program. She readily accepted the recommendations of the Advisory Board, adding flower and multiple qualifying conditions resulting in greater product choices for patients and expanding PA's patient population. Dr. Levine made sure that Pennsylvania adapted to the challenges posed by the pandemic by expanding the monthly purchase amount allowed under PA law, allowing telemed for new patients and recertifications, authorizing curbside delivery for dispensaries and eliminating the five-patient limit for caregivers."

Levine has also been open to the notion, supported by science, that cannabis could play a role in alleviating the opioid epidemic. This is in sharp contrast to former Assistant Secretary for Mental Health and Substance Use Elinore McCance-Katz, who resigned her post on January 7. In 2018, McCance-Katz called research showing medical marijuana states have fewer opioid overdoses "flawed." Instead, she touted her agency’s success in promoting MAT (medically assisted treatment, meaning methadone, naltrexone, or buprenorphine) for opioid abuse, something also advanced by our new Acting Director of the White House Office of National Drug Control Policy (ONDCP), Regina LaBelle. (No word on LaBelle's opinion of marijuana. NORML lobbied for the Biden/Harris administration to eliminate the ONDCP.) 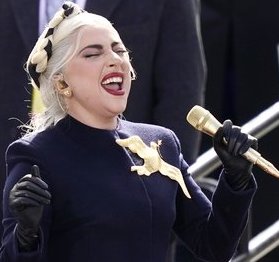 Singing the National Anthem at the Inauguration was Lady Gaga, who lit up a joint onstage at her concert in Amsterdam in 2012, declaring weed "wondrous." She was quoted as telling The Sun newspaper: "I want you to know it has totally changed my life and I’ve really cut down on drinking." That year, she dressed as a pot fairy for Halloween.

In 2013 Gaga said on a radio show that she'd been smoking smoking a lot of marijuana after she'd broken her hip onstage and was dealing with pain, anxiety and "coping." She called herself "addicted" to weed but with weeks, she backpedaled on her statement, telling a talk show host she still loves to smoke pot, because it makes her feel like she's 17 again.

Making a big splash in her strong national debut at Wednesday's ceremony was National Youth Poet Laureate Amanda Gorman reading her poem "The Hill We Climb." It was reminiscent of Maya Angelou's reading of her poem "The Pulse of the Morning" at the 1993 Clinton inauguration. Angelou wrote about her use of marijuana in the sequel to her book I Know Why the Caged Bird Sings.

With a 50-50 Senate, Harris could break a tie on a bill to end federal marijuana prohibition in the coming Congressional session. She is the Senate sponsor of the Marijuana Opportunity Reinvestment and Expungement (MORE) Act, which passed the House in December in a historic vote. However, the Republicans could still filibuster the process.

Devi, BTW, is the name for "Goddess" in Hindu mythology. One of the names of the Goddess is Parvati, who legend has it discovered ganga and shared it with her consort, Shiva. In her Durga form, Devi rides in on her lion and conquers evil. May the Goddess rule the day.