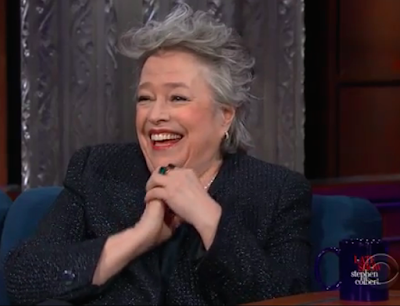 The venerable actress Kathy Bates not only played a medical marijuana dispensary owner on the Netflix series Disjointed this year, she also made the rounds of the interview circuit, talking up the medicinal uses of marijuana and candidly speaking about her own use.

Asked by the New York Times if she smokes pot, Bates replied, "Yeah, I do. I’ve had a prescription for some time for chronic pain. I’ve really become a believer. I find it just as, if not more, effective than other pain relief." She also said she supports legalization "even more so now that I’ve become more educated about what its properties are" and mentioned meeting NFL players in the Gridiron Cannabis Coalition.

AARP Magazine's headline was Kathy Bates: She's Smokin', and Stephen Colbert introduced her as "an Academy Award–winning actress who terrified us in Misery, inspired us in Titanic, and now she sells us weed on the Netflix show Disjointed." She demonstrated her technique for using a vape pen for Stephen, and gifted Chelsea Handler with a cannabis wrist corsage for her interview on Chelsea.

Bates also played a marijuana-smoking lawyer in the 2011-12 TV series "Harry's Law," and portrayed Alice B. Toklas's lover Gertrude Stein on film in Woody Allen's "Midnight in Paris." In 2014 she said she'd shared "some good sh##" with Susan Sarandon and Melissa McCarthy.

Gotta say, though, having just seen Bates in "The Great Gilly Hopkins" (2015), it made me wish the writing for cannabis-themed movies and TV could approach a great film like that one. 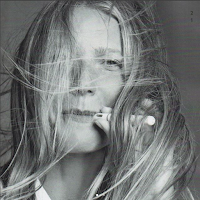 Outie of the Year

Admission of the Year 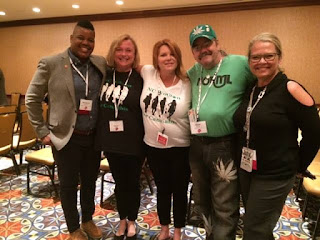 Peachtree NORML founder Sharon Ravert (pictured at right with members of the NC Women and others) lobbied to bring the Drug Policy Alliance conference to Atlanta this year. Just before the event, Atlanta, which had the worst-in-the-nation record for arresting blacks over whites for marijuana, passed a decriminalization measure. NORML is working to pass more reform measures throughout Georgia and Sharon produces a segment on 420radio.com highlighting the stories and work of other women in the fight to end marijuana prohibition.

Women could push marijuana legalization across the finish line in Texas

Congresswoman Tulsi Gabbard on the future of marijuana legalization 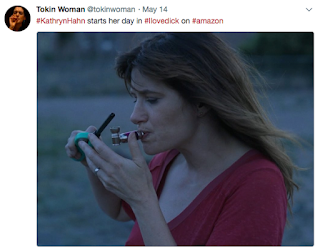 
The Daily Show: Roy on Drugs

Russell Brand on His Favorite (and non-favorite) Drugs

Kathryn Hahn's Wake and Bake on "I Love Dick"

Mary Janes: The Women of Weed

The Only Living Boy in New York

Kelsey Darragh: I Tried Medical Marijuana For 30 Days
To See If It Could Cure My Chronic Pain

Now This: This Grandma Wants You to Smoke Weed 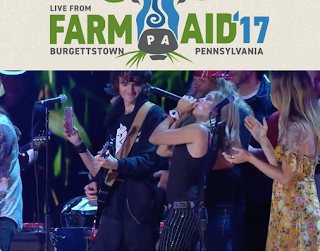 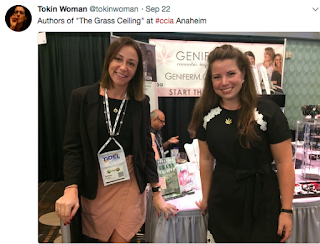 Paula Poundstone: The Totally Unscientific Study of the Search for Human Happiness

Tom Angell, The Marijuana Moment: Teen Marijuana Use Down In Most Legalized States, Federal Data Says 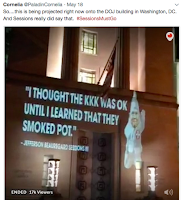 "I Thought the KKK was OK" (pictured)

Diane Goldstein accepting the H.B. Spear Award for Achievement in the Field of Law Enforcement at the Drug Policy Alliance Conference. 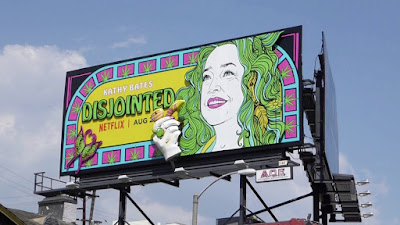 The "moving hand" billboard on Sunset Strip for Disjointed. (See it moving at night.)

Women Who Smoke Marijuana Are Smarter Than Women Who Don't

Medical Marijuana for Children with Cancer? What Providers Think

Children More Likely to Overdose If Mothers Are Prescribed Opioids

Energy Drinks Are a Gateway to Cocaine and Alcohol


"What Were They Smoking?" Award


Ann Coulter: Marijuana use is “destroying the country”

Sen. McCaskill: If Pot is Legal "Kids Will Get Handed Joints Like They Get Handed Beers"


A Fond Farewell To: