Mad Men, Their Women, and Marijuana

The acclaimed AMC series "Mad Men" is not without its marijuana references. Set in the 1960s, the first season had talk of a competing ad agency where everyone smoked and the creative product was better. Adman Don Draper smokes pot with his Greenwich Village girlfriend Midge, whose friends give him grief about his career. "I feel like Dorothy," he says. "The world just turned to color.

In the following episode he refuses a job with a global ad agency, saying when he leaves his current job he'll do something else with his life. An interview with actress Rosemarie DeWitt, who plays Midge, said it was suggested she read Diane di Prima's "Memoirs of a Beatnik" in preparation for the role. 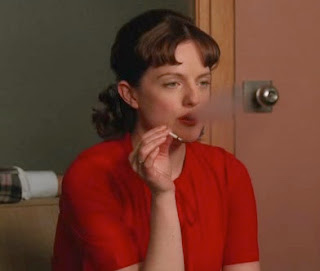 Season 3 has mousy-secretary-turned-copywriter Peggy Olson announcing "I want to smoke some marijuana" then, "I'm so high." As she leaves the room, she says, "I'm in a very good place right now." Next she expresses a sudden fascination with her secretary's necklace. She later takes a walk on the wild side with a lesbian friend at a Village pot party.

Season 4 has Don the Dick smoking "grass" with his faux wife/mother figure Annie in California, but soon he's back to New York where his entertainment is drinking and buying $25 hookers who look like Joan and Peggy for himself and a colleague.

UPDATE April 2014: Season 6 opens with Don toking once more in Hawaii, after his wife Megan scores a couple of joints she stashes in her bikini. As we move into the late 60s and the gang starts sporting longer hair and sideburns, pot smoking becomes more common, with Don announcing, "Smells like creativity in here" when his writers are caught smoking in the office. In another episode, Don tokes up with an editor to fuel a late-night work session. Even stuck up account exec Pete gets in on the puffing, and a Dr. Feelgood shows up to wreak havoc at the agency with shots in the butt of the kind Elizabeth Taylor got. 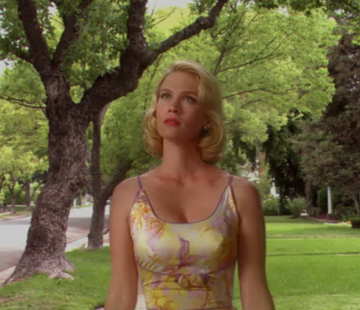 When housewife Betty tries to rescue one of Sally's friends from the Village, she's offered pot, but turns it down. The only time the long-suffering Betty got to do something more interesting than drink wine alone while waiting for Don to come home was in the Season 3 opener, when she was put into Twilight Sleep while giving birth, during which she had visions of her deceased father and mother.

The agency crew takes a business trip to Southern California, where Don joins in a hookah-smoking circle at at swinging party and starts having visions, leading him back to a more authentic life (perhaps). By the end of the season, he's put down alcohol and has a rare moment of honesty about his past life.

The final Season 7 of "Mad Men" premieres on April 13 and is set solidly in the 70s. See the Psychedelic Journey trailer here. So far, Roger is the only character who's done LSD, but that may change...
Posted by Tokin Woman at 12:26 PM