Editor's note: It's rare that Tokin Woman crosses paths with People magazine. But here's a case in point. (With, undoubtedly, more to follow.)

Heather Donahue correctly predicts in her new book “Growgirl” that the words “Blair Witch Project” will appear on the cover, over her objections. The actress that will forever be linked to that 1999 indie flick afterwards appeared in some mainstream films and television shows, but decided to leave LA for a country life, one that ultimately included marijuana farming in a place she calls “Nuggetown.” She has now emerged as a new, strong female voice for reason and sanity in our marijuana laws. Her wickedly funny, inspired and insightful book “Growgirl: How My Life After the Blair Witch Project Went to Pot” will be released on January 5. (Read more.)

I’ve been kinda stalking Heather since I saw a hilarious video of her reading from Growgirl on YouTube last year. She spoke at Humboldt Hempfest in November, and came to a NORML Women’s Alliance fundraiser in San Francisco, where she kindly agreed to answer some questions for Cannabis Culture.

Q: Is this the first book you've written?

A: This is the first publishable book I've written. Don't ask about that "learning novel" I spent seven years on. Or the "learning screenplays" or the short stories. They're at home in a nice, dark drawer.

Q: How did you learn to be such an astute observer of human behavior? And your own emotions? What is your educational background?

A: That's nice of you to say. My educational background is public school followed by a four-year dose of Theater training at The University of the Arts in Philadelphia. I think my theater training and time spent as an actress helped me to slip into other skins smoothly. I also have a long-standing (if irregular) meditation practice, which has helped on the observational front. Also, I was sort of born creepy. When I was a kid, my mom would sometimes get angry and I would just stare at her, just sort of taking it in an observing her. It was, um, disturbing. And of course everything's clearer with the passage of time, my own motivations and those of others, the protagonist of the memoir is generally a wiser, warmer, and more insightful person than the writer herself, except on her best day. 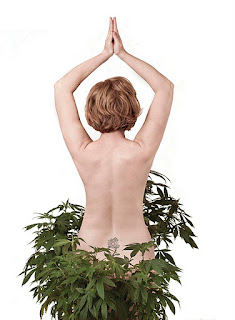 Q: At what point did you decide to write about your experience as a pot grower? What was your aim?

A: I was originally going to write a memoir about my attempt to morph from a city girl into a country girl, but most of my homesteading experiments were not, shall we say, wildly successful. Except for the raising of my dog. That went well. It took about six months into my first draft of Growgirl to even type the word "pot" or "marijuana". The paranoia I experienced as a grower was pretty entrenched by that point. I really wrestled with writing a memoir. I considered just calling it an autobiographical novel at first, but I felt like my story was one that should be shared. It's not all ballers growing pot. There are a lot of pretty normal people who've taken to growing as a way to weather this economy and try to carve out a sustainable life with some semblance of autonomy, often in beautiful places that don't have many other jobs available.

Q: When did you first smoke marijuana? Was it a positive experience?

A: I was in high school and a co-worker at Sneaker Express gave me a joint. I shared it with friends and we laughed our asses off. I felt totally at home in my body, which was rare in those awkward teen years.

Q: I love that in the book your mother praised your courage, and that you were able to tell your parents what you were up to. Had they talked to you about cannabis or drugs while you were growing up?

A: My parents have always been supporters of anything my brother or sister or I have taken on. I don't remember a specific conversation about drugs, but we always knew we could go to them with questions about pretty much anything and not be judged. Consequently, none of else felt a big urge to rebel via sex or drugs. I find it kind of funny that I tried later and my heart just wasn't in it. I make a crappy rebel. I make a good independent lady, but a terrible rebel.

Q: You got into marijuana growing through a guy, but refused to be his "pot wife," growing your own instead. Did you encounter any other women who were similarly independent in the trade?

A: Yes. But they tend to be less visible, and more aware of how they're seen in the broader community. I think this might be due to a stronger self-preservation instinct, and that they often have more to lose. When in Nuggettown's coffee shop, it isn't too hard to guess who the grow guys are, and not just when they buy a latte with a $100 bill, but there's just a certain look. Women I knew who grew, avoided having that look. Pot wives had it, but not growgirls. I'm generalizing here, obviously, but a game of Spot the Grower can be good fun.

Q: You explain well the pitfalls of an underground culture: the inability to express yourself publicly; the spoiling of children around too-easy cash; the "gaming" of the medical law. You've expressed concern about the marijuana trade becoming corporatized, asking in your Huffington Post blog, "Is there a middle path?" What would be your ideal world in which pot was legal?

A: Well there's a loaded question. A few things first, I would not suggest that it's too-easy cash. I would suggest that it's very flowy cash, that it comes with a generous dash of Carpe Diem. The medical system is so widely open to interpretation and local amendments that it is almost designed like a game--if you're willing to take the risk, then you may have the reward. This helps keep the price up. From the side of getting a doctor's recommendation, am I gaming the system because I got mine for $50 and a claim of PMS? Or am I getting my uninsured self some relief? Is pursuit of wellness a legitimate medical use? Are the laughs brought by smoking a health-enhancing stress reducer, or does smoking to giggle fall strictly under recreational use? Is feeling great a matter of health or recreation? These are blurry lines worthy of exploration, as long as we make sure that deeply ill patients still have safe access no matter how those sorts of debates shape up.

There are so many ways that you could look at the medical marijuana world and see gaming. It's harder to imagine a way of looking at it that seems entirely forthright. It's this slipperiness that has allowed it to become such a large industry, and the only one I see out there whose wealth is still primarily distributed at the mom-and-pop level. There should be some very conscious consideration around that as we progress toward legalization. I have big concerns that legalization will bring corporatization. I think, in some ways, the way the business is evolving now is ideal. It's the federal illegality that's keeping in the hands of regular people. This industry bloomed when Obama insisted he wouldn't prosecute anyone compliant with state law. The industry bloomed, but the prices dropped. It could be argued that the prices dropped to fair levels, and in some cases, made energy-sucking indoor grows less appealing. Hopefully Obama will go back to honoring his promise, and this will drive technologies like LED growlights forward, encouraging the development of a truly green industry.

Marijuana legislation should be left to the states. Take some of the DEA budget and put it into healthcare, or repurpose it to fund studies that will figure out why cannabis is so effective on epilepsy. Use Federal money for something that benefits citizens rather than oppresses them, as the enforcement of prohibition does.

Q: What was it like marketing the book to a publisher? Did your Hollywood agent help? Did you encounter derision, moralizing?

A: I didn't have a Hollywood agent anymore by the time I was working on the proposal for this book. I sent out query letters to about five different agents who I thought might be a good fit, and that's how I found my agent Mollie Glick. She shopped the proposal to editors who seemed to like it. I didn't encounter any moralizing directly. I got more derision from random people who can't understand why I would never leave acting, and that deciding to grow pot was somehow a bottoming out. I don't see it that way at all. For me, it was about taking my story back, seeing what else I might become. I left acting and started growing pot because I wanted to create a life I loved in a beautiful place.

Q: What's it been like doing public appearances about the book?

A: I had some idea of what I was getting into by writing this book. It's controversial material, I get that. Oddly, it's controversial on both sides. Some people in the marijuana world don't like how I've written about it. And anti-drug people think I'm glamorizing badness. What can you do? I just hope people on both sides will read it and see that at heart it's a story about a woman trying to find her place in the world. And that the cannabusiness is not all ballers and kingpins, it's a lot of regular people trying to keep the middle class dream alive.

Q: Are you in touch with any of your former community in Nuggetown? What do they think of the book?

A: Willa's read it. She and I are still besties. Ed's read it. But for the most part, I'm not in touch with the people that I've written about. By and large they're not so enthusiastic about it. I understand this. I chose to write a book. They didn't. This is why everyone's been disguised and most characters are composites.

Q: Is there interest in making the book into a movie?

Q: Other than promoting the book, what are you up to these days? Where do you think you're headed? Are you interested in making more films, as an actress or otherwise? Or will you again leave that question up to the universe?

A: Getting Growgirl out into the world is more than a full time job right now. I have several other book ideas in mind, and it's getting to be time to choose. In the broader scheme of things, I have no idea where I'm headed. I still have no Plan B. What I do have, what being a grower gave me, was a fair level of comfort in uncertainty. I love films, but I wouldn't want to be in front of the camera again. I love writing because I can do it anytime anywhere. What I liked least about acting was the permission required. I don't want to go back to a job where I need permission to do my thing. At the risk of sounding like a hippie, I'm open to what comes.
Posted by Tokin Woman at 8:20 PM