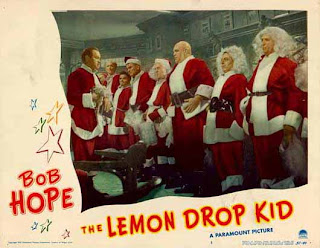 VIP Bob Hope was perhaps the most beloved American entertainer with the most longevity, best known for entertaining US troops abroad and for his Christmas TV shows.

Tonight, TCM aired Hope's 1951 movie "The Lemon Drop Kid" in which he and Marilyn Maxwell sing "Silver Bells," a song written for the film. Based on a Damon Runyan story, the movie has Hope rounding up New York's petty crooks to dress as Santas and collect money for a phony charity.

While singing the song about 56 minutes into the movie, Hope is clowning around just after it's established a policeman can't shut him down because he's licensed. He stops to sniff a big meerschaum pipe smoked by a street corner Santa, after which he acts goofy, whistling and flapping his wings. (The tune is actually introduced by William Frawley as "Gloomy," who sings, "chunk it in/chunk it in/or Santy will give you a Mickey.")


Hope joked about pot on radio broadcasts in the 1940s and while entertaining troops in Vietnam in the 1970s. "I hear you guys are interested in gardening here," he quipped. "Our security officer said a lot of you guys are growing your own grass." Poignantly, he added that "instead of taking it away from the soldiers, we ought to give it to the negotiators in Paris." The jokes were censored from Hope's 1970 Christmas special (so much for Peace on Earth).

Hope, who admitted to trying pot in a Rolling Stone interview in 1980, gave a nod to his "Road" movie co-star Bing Crosby at the end of The Lemon Drop Kid. Crosby, whose recording of "White Christmas" is the best-selling single ever, was also a VIP. 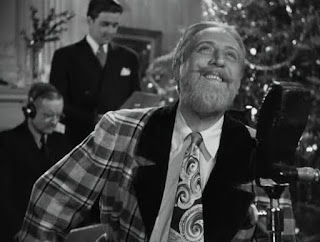 Another beloved Christmas film, "The Man Who Came to Dinner" (1942), edits out a scene from the 1939 play by Moss Hart and George S. Kaufman where absinthe is mentioned. In the film, Sheldon Whiteside, based on and played by the theater critic Alexander Woolcott, is the unwanted guest of staid Ohio industrialist Ernest Stanley over the Christmas holidays.

The original play has this scene:

JOHN (manservant): And Sarah has something for you, Mr. Whiteside. Made it special.

WHITESIDE: She has? Where is she? My Souffle Queen!

SARAH (cook): (Proudly entering with a tray on which reposes her latest delicacy) Here I am, Mr. Whiteside.

WHITESIDE: She walks in beauty like the night, and in those deft hands there is the art of Michelangelo. Let me taste the new creation. (...swallows at a gulp one of Sarah's not so little cakes. An ecstatic expression comes over his face) Poetry! Sheer poetry!

SARAH: (beaming) I put a touch of absinthe in the dough. Do you like it?

Interestingly, the word "counterfeiting" in the play's line, "If that's for the Stanleys, tell them they've been arrested for counterfeiting," was changed to "dealing dope" in the film. Mr. Stanley brags of building ball bearings for the war effort, which is what the real Ohio industrialist Henry Timken did. Timken's son Harold H. ("Henry") also grew hemp in Imperial Valley, California in 1917.

In his latest brilliant column on marijuana, VIP Andrew Sullivan skewers David Frum and NIDA for their backwards words and policies. He writes,

"The whole point of marijuana use is to disrupt settled ways of thinking and feeling, to offer a respite, like alcohol, from the deadliness of doing. But for reasons we don't quite yet understand, marijuana, like other essentially harmless drugs in moderation, can prompt imaginative breakthroughs, creative serendipity, deeper personal understanding, and greater social empathy and connection. People need these things and have always sought refuge in them, especially at this time of year in the Northern Hemisphere."