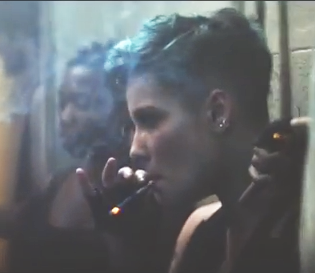 Coached by Tokin' Woman Miley Cyrus, ex-medical student Moushumi survived a knockout round on NBC's The Voice this week by belting out Halsey's song "New Americana" with the lyric:

We are The New Americana
High on Legal Marijuana...

The wildly popular song is from Halsey's debut studio album, Badlands, released last year via Astralwerks, Universal's electronic and dance label. The artist formerly known as Ashley Frangipane cultivated her huge following with parodies of Taylor Swift songs posted on YouTube, and by uploading her song "Ghost" to Cloud.

Halsey, who has used the term "tri-bi" (biracial, bisexual and bipolar) to identify herself, sings she was "raised on Biggie and Nirvana," and she's been compared to Lourdes and Luna del Rey.

In the song's dystopian video, Halsey smokes joints at the appropriate lyric (shown), and is soon hauled away by gun-toting thugs who try to (literally) burn her at the stake. Pot-puffing hippies look on passively, then save her with the help of a well-timed smoke bomb. It's a pretty bold statement from one so young. Did she connect that the witch burnings kept both women and herbal medicine suppressed in the West for centuries?

Here's something really radical: the city of Coalinga in conservative Fresno County, California is taking steps to convert a prison into a medical marijuana facility. Now, that's the New Americana.