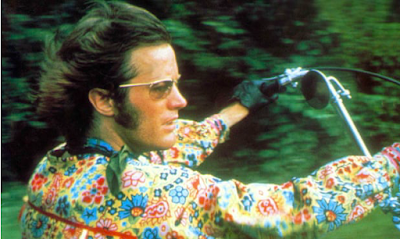 Peter Fonda, who taught Jack Nicholson how to smoke pot (and smoked it himself) onscreen in Easy Rider, has passed away at the age of 79.

Fonda shared a screenwriting Oscar with Dennis Hopper and Terry Southern for the breakthrough 1969 film, which is listed on the American Film Institute’s ranking of the top 100 American films, and included in the US National Film Registry for being “culturally, historically, or aesthetically significant.”


Fonda was the only son of cinematic icon Henry Fonda, who was the American everyman standing up for justice in films like The Grapes of Wrath and 12 Angry Men. That someone with such a pedigree would embrace marijuana on film at a time when smoking a joint could land you in prison was no less than spectacular.

In their tweets, Hollywood Reporter called Fonda a "counter-cultural icon" and Rolling Stone "a counter-culture hero." That Fonda died 50 years after Easy Rider was released, during the 50th anniversary of Woodstock, will surely cement his counter-culture status. 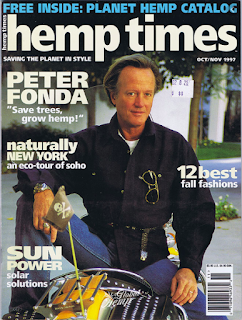 Fonda was interviewed sitting on his motorcycle for HempTimes in 1997, and spoke to CannabisNow last year about his film Boundaries, in which Christopher Plummer sells him pot.  He reportedly once said, "I don't trust anyone who didn't inhale" and inspired the Beatles song "She Said, She Said" during an acid trip with members of the Beatles and the Byrds.

His sister Jane didn't puff on film until 1980 (in 9 to 5). His daughter Bridget toked from a bong wearing a bikini in Jackie Brown (1997), the same year Peter made a comeback with Ulee's Gold, which won him an Oscar nomination and shot Jessica Biel into the stratosphere. Nicholson beat him out for the Oscar, and acknowledged "my old biking buddy Peter."

Smelling marijuana (apparently being smoked by his sister standing nearby) at a 2011 post-Oscar party, Catherine O'Hara joked, "Do you smell the weed? We’re blaming it on Peter Fonda.”

“He has a strange, complex mind that grasps and hangs on to details ranging from the minutiae of his childhood to cosmic matters, with a staggering amount in between," Jane wrote of her brother. In a statement upon his death she called him "the talker of the family" and wrote,"He went out laughing.” Sounds like a stoner to me.

Fonda's family put out a statement that concluded, "And, while we mourn the loss of this sweet and gracious man, we also wish for all to celebrate his indomitable spirit and love of life. In honor of Peter, please raise a glass to freedom." I think they must have meant a joint.
Posted by Tokin Woman at 6:19 PM