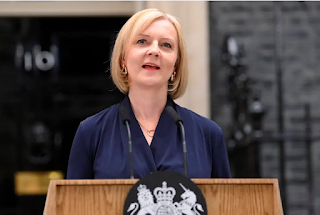 UPDATE 10/20: Truss has announced she will resign her post. Boris Johnson is expected to stand in the Tory leadership contest to replace his successor Truss. Others are calling for a general election.
You knew she was in trouble when, entering the Queen's funeral, she was misidentified as a minor Royal.
Former UK Environment and Foreign Secretary Liz Truss has been appointed as the UK's new prime minister after winning the Conservative Party leadership election that followed Boris Johnson's ouster.
Truss was criticized during her campaign for flip-flopping politically, since while at Oxford University, she was president of the university branch of the Liberal Democratic Party. According to ABC News, "The economically centrist Lib Dems back constitutional reform and civil liberties, and Truss was an enthusiastic member, putting up 'Free the Weed' posters that called for decriminalization of marijuana and arguing in a speech for the abolition of the monarchy."
After graduating college, Truss went to work for Shell Oil and became a conservative. Of late, she's been modeling herself after Britain's first female prime minister Margaret Thatcher, down to imitating her hairstyle and dress.
In a 2001 interview with NME magazine Truss was asked for her opinion on marijuana legalization and replied, "I don't agree with it. Where do you stop?" (In the same interview, Truss confirmed Macy Gray to be a favorite musician. Perhaps she hasn't heard Gray's song, "Stoned.")
Truss balked when UK territory Bermuda voted to legalize cannabis in May 2022. After Governor Rena Lalgie blocked the law and asked for approval from the foreign secretary, talks were held but no decision was announced. (See update.)
As Environment Secretary in 2014, Truss launched a 10-year bee and pollinator strategy attempting to reverse the trend of falling bee populations. In 2015, she was one of only two cabinet ministers to vote against the government's successful proposal to introduce plain packaging for cigarettes.
Lib Dem Treasury spokesperson Sarah Olney commented after a 1994 leaflet Truss produced at Oxford asking about marijuana legalization surfaced, “Liz Truss has changed her position on almost every issue. Just like Boris Johnson she will say anything to further her own career."
After meeting the Queen at Balmoral Castle today, Truss gave a brief acceptance speech in which she promised to turn the UK into "an aspiration nation" supporting "freedom and democracy around the world" and building "the modern, brilliant Britain that I know we can be" with Reagan/Thatcher-style tax cuts to grow the economy.
Posted by Tokin Woman at 9:34 AM