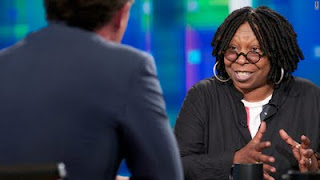 Morgan reported that Newsweek magazine recently said Whoopi was the most popular host of The View and is even more popular than Oprah. Her contract on The View is up for renewal.
Posted by Tokin Woman at 7:24 PM No comments: Links to this post 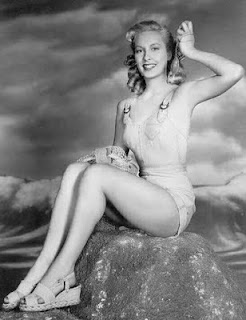 I'm reading Cheryl Crane's book Detour: A Hollywood Story. Crane is the daughter of Lana Turner, the "sweater girl" who took her moviestar name from Spanish for "wool." Crane's is a sad tale of being shuffled from nanny to nanny while contending with her mother's string of boyfriends and husbands, one of whom, "Tarzan" actor Lex Barker, violently molested her when she was 10. On Good Friday 1958, the 14-year-old Crane stabbed mobster Johnny Stompanato to death when he attacked Turner, and no story about Cheryl or her mother appeared thereafter without "the paragraph" about the incident.

Crane was indirectly affected by the war on marijuana in 1948, when her father's fiancee Lila Leeds (pictured) was famously arrested along with Robert Mitchum for marijuana. Leeds was a 20-year-old starlet under contract at Warner Brothers who resembled Lana Turner and met restauranteur Stephen Crane when she worked as a hat-check girl at Ciro's. One of her bit parts was in Turner's vehicle Green Dolphin, where she plays a Eurasian woman who drugs the leading man and rolls him.

"Dad knew that Lila had smoked pot ever since she tried it at a St. Louis party three years before with members of the Stan Kenton orchestra, and sometimes she overdid it....She was often stoned, and his friends cautioned Dad that she had a problem, but he knew pot was no enslaving 'devil's weed,' as it has been painted in the unintentionally hilarious 1936 cautionary film Reefer Madness."

After Leeds was arrested, Stephen Crane fled to Europe rather than become entangled in scandal, abandoning Cheryl when she was only five years old. There he tried his hand at writing a gossip column titled, "Champagne and Vinegar." In his debut column he wrote about the Mitchum bust, saying, "Yet if Mitchum should come to Paris he could attend a small private jive club on the Left Bank where waiters come around to the tables and roll the marijuana cigarettes for you." No less than three Hollywood stars, he noted, were "seen entering" the place the previous week.

Crane writes that Leeds said she was introduced to heroin by inmates at LA County Jail when she served her 60-day sentence, and it lead to addiction. Other than the Reefer Madness-style anti-drug film "She Shoulda Said No," Leeds never had another film role. She became so destitute that she hocked the 3-carat diamond ring Stephen had given her for $750. In the 70s, she worked as a faith healer for addicts.

According to Wikipedia, Cheryl was detained by the Los Angeles Police Department in 1969 when three half-grown marijuana plants were discovered in the back seat of her car.
Posted by Tokin Woman at 6:19 PM No comments: Links to this post