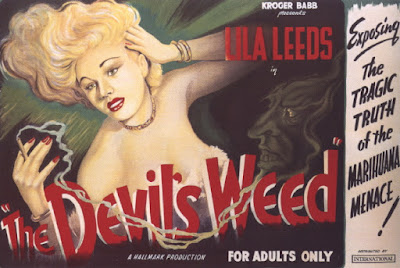 Lila Leeds was 20 years old when the actress was arrested with VIP Robert Mitchum for marijuana in 1948. While Mitchum's star power, and the money the studios had invested in him, carried him through the ordeal that followed, Leeds never recovered from the incident.

Under contract to MGM, Leeds appeared with Red Skelton in The Show Off (1946); one of of her bit parts was in Lana Turner's vehicle Green Dolphin Street, where she plays a Eurasian woman who drugs the leading man and rolls him. When the film was released, she wasn't even credited for her part.

"It left her shaken up, depressed," wrote Lee Server in Robert Mitchum: Baby I Don't Care. "She would spend long nights at the bop clubs in Hollywood, chasing her blues away. Lila had always been jazz-happy and she knew many of the local musicians. She smoked reefers with them in their dressing rooms and in the parking lots, even at the tables if the owners were cool."

"I smoked socially," Lila said. "The way some people take a drink. Pot doesn't affect me much--just makes me sleepy and relaxed."

At the time of her arrest with Mitchum, Leeds was engaged to Turner's ex-husband Steven Crane. Their daughter Cheryl Crane's book Detour: A Hollywood Story says: "Dad knew that Lila had smoked pot ever since she tried it at a St. Louis party three years before with members of the Stan Kenton orchestra, and sometimes she overdid it....She was often stoned, and his friends cautioned Dad that she had a problem, but he knew pot was no enslaving 'devil's weed,' as it has been painted in the unintentionally hilarious 1936 cautionary film Reefer Madness."

After Leeds was arrested on August 31, 1948, Stephen Crane fled to Europe rather than become entangled in scandal. There he tried his hand at writing a gossip column titled, "Champagne and Vinegar." In his debut column he wrote about the Mitchum bust, saying, "Yet if Mitchum should come to Paris he could attend a small private jive club on the Left Bank where waiters come around to the tables and roll the marijuana cigarettes for you." No less than three Hollywood stars, he noted, were "seen entering" the place the previous week.

In a police deposition, Leeds accused her roomate Vicki Evans of being a police informer, and said that Mitchum was framed for the offense (Source: Pittsburgh Post-Gazette, Sept. 27, 1949). Leeds said she and her roomate often smoked reefers together but Evans refused to smoke them on the day of the bust, and she was the one who let police in. Evans (real name: Florence Fidele of East End, Pittsburgh) denied the charge two days later in the same paper. Neither Evans nor bartender Robin Ford, who brought Mitchum to the scene of the arrest, were tried for the incident.

Crane writes that Leeds was introduced to heroin by fellow inmates at LA County Jail, and it lead to addiction. Other than the awful Reefer Madness-style anti-drug film She Shoulda Said No (aka The Devil's Weed), Leeds never had another film role. She became so destitute that she hocked the three-carat diamond ring Stephen had given her for $750. In the '70s, she worked as a faith healer for addicts.

Jennifer Lawrence resembles Lila; she's the perfect actress to play her in a long-overdue biopic. Personally I suspect Lana Turner might have had something to do with the arrest of her seven-years-younger rival (similar to a plotline in the 1997 movie LA Confidential).
Posted by Tokin Woman at 8:26 PM