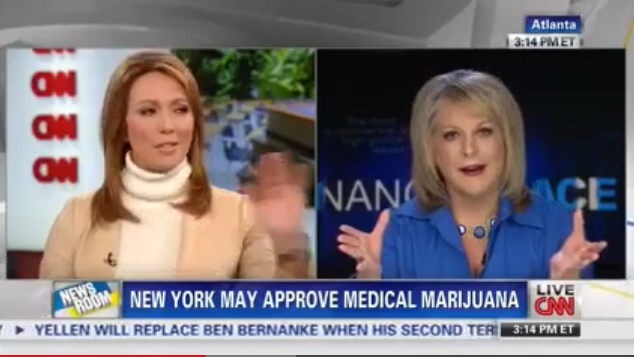 HLN host and former prosecutor Nancy Grace is back getting flack for yet another wild and scandalous statement. When asked by CNN's Brooke Baldwin about Colorado's new, hugely successful pot legalization law, Grace called it "a horrible idea."

Grace first raised the specter of stoned cab driver or airline pilots, and when Baldwin countered with the idea of responsible use in one's own home, she responded, "Your home, where you're supposed to be taking care of your children, or cooking on a gas stove or lighting a fireplace? Not a good idea."

“When I’m at work, I don’t want my babysitter high on pot,” Grace said. “The ones that are disagreeing are lethargic, sitting on the sofa eating chips. Pot, it makes you fat and lazy.” Grace, who claimed to have read "every shred of scientific data" ever written about the subject, must have missed the one that found pot smokers are skinnier and healthier than their counterparts. Ditto for Tina Brown, who Tweeted, "...legal weed contributes to us being a fatter, dumber sleepier nation even less able to compete with China."

At least Grace pointed out that drivers should only be prosecuted if they're impaired, not if they happen to have metabolites in their urine or hair. But that didn't stop her from scare-mongering about driving at the outset of the interview. At the end of the segment, she accused Baldwin of being pro-pot because she interviewed a Colorado tour operator about his pot tours.

Grace is no stranger to hyperbole, and loves to sensationalize cases involving children and drugs. According to Wikipedia, the Supreme Court of Georgia twice commented on Grace's conduct as a prosecutor, once  in a 1994 heroin-trafficking case in which the Court declared a mistrial, saying that Grace had "exceeded the wide latitude of closing argument" by drawing comparisons to unrelated murder and rape cases. An episode of The Newsroom deals with the difficulty of presenting real news opposite the sensationalism of Grace's handling of the Casey Anthony case.

In September 2006, 22-year-old Melinda Duckett committed suicide following an interview conducted by Grace concerning the disappearance of Duckett's 2-year-old son Trenton. Toni Annette, dubbed the "vodka mom" by Grace, who brought a bottle of vodka onto her set in an attempt to mock Medrano following the death of her infant son, committed suicide by setting herself on fire after the interview.

On the lighter side, one website responded to Grace's latest rant with a VIP-heavy story titled, "Hi, Nancy Grace: Here Are Some ‘Fat and Lazy’ Pot Smokers Who Never Amounted to Anything." D Funk Time Michaels @darinlovesbacon tweeted, "As a fat and lazy person, I don't appreciate Nancy Grace accusing me of smoking pot."

Meanwhile a satirical news story claiming 37 died from overdoses on the first day of legalization in Colorado has made dupes out of millions, including Sweden's Chief Justice Minister, Beatrice Ask.

If Grace and Ask are concerned about crime (as they should be), they shouldn't miss the new study finding that states who've passed medical marijuana laws, and their neighboring states, have fewer assault and property crimes.

As an example, she talked about the first pot case she saw as a prosecutor, with a “...gorgeous lady standing in the middle of the courtroom crying, and I didn’t understand what was going on. They said she was a stockbroker. She had got addicted to pot, ended up losing her job, wrecked her car, couldn’t make her house payments on her house, so her husband got custody of the children, and now she has no house, no car, no family, nothing.” Even if true, she didn't stab or strangle her family. And arguably, stockbrokers are the real criminals in our society.

The Young Turks showed an interesting mash up of Grace on the topic.
Posted by Tokin Woman at 1:51 PM