Ann Coulter Shows Her Lack of Humanity About "Potheads" 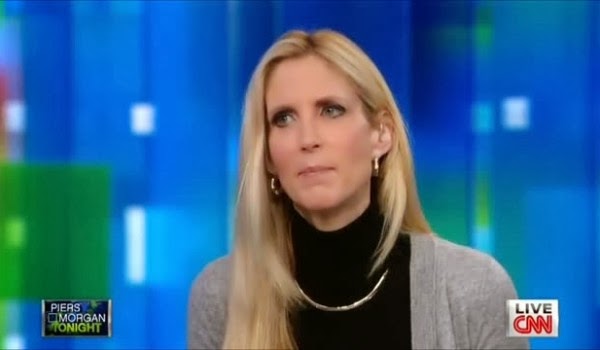 According to an interview last night with CNN's Piers Morgan, Ann Coulter's preferred country would be one where people smoke and work themselves to early deaths on tobacco. Her stated reasoning: not only do people "stay up all night working" hyped up on nicotine, they die young, saving Social Security costs.

In the contentious interview, Coulter also declared "alcohol is good for you"  and said everyone should have a glass or two every day. She admitted that she's drank before going on TV, which Morgan said perhaps explained a lot.

Coulter pulled out the "people don't drink alcohol to get drunk" argument, to which Morgan correctly replied, "Yes, they do," and  Coulter admitted "you might get a warm feeling" after drinking wine.

She then went with the "marijuana legalization is bad for commerce" argument, using as an example a lazy pool guy who was a "pothead," extrapolating from there to conclude that those who smoke pot can perform no useful tasks (like founding Apple or Microsoft).

Morgan's argument that no one's ever died of a cannabis overdose didn't fare well with the death-loving Coulter, who claimed young people are having early heart attacks because they're potheads, but "at least they'll save me money if they just go ahead and die."

"How humane of you," was all Morgan could say.

Watch the video below:

If ever someone needed to learn how to relax and smoke a joint, it's Ann Coulter. Maybe then she'd find her lost humanity.