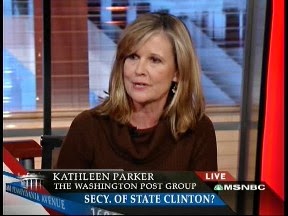 Following the Ruth Marcus I-smoked-pot-but-others-should-go-to-jail-for it column, the Washington Post has now published two opeds from its columnists in favor of marijuana legalization, one by E.J. Dionne Jr. and today's by the "mostly right of center" Kathleen Parker.

Dionne asserts he's not interested in smoking marijuana, partly because he fears it might lead him back to nicotine. Parker says she partied in her youth, and has given it up in favor of caffeine (she's a Starbucks gal).

Admitting that she once lied to her young children about her pot-smoking past, Parker now says, "The correct answer to all such questions is that any drug, including alcohol, is bad for children, hence a drinking age, even if many ignore it. Children’s brains aren’t fully formed, and they are not yet aware of the dangers that accompany impaired judgment. Mind-altering chemicals are bad for adults, too, if abused. But adults at least can make informed choices."

Parker takes pains to point out that Marcus's stance "isn’t hypocrisy, which I embrace in the service of civilization, so much as perspectives developed through maturity and experience." Her own perspective, as the parent of a three teenaged boys, lead her to support legalization, because, "I couldn’t imagine then or now that children might be labeled criminals for behaviors that mostly required parental attention."

Parker writes, "Regulate and tax the tar out of it, please, but let’s stop pretending that pot consumers are nefarious denizens of the underworld. Among those who enjoy a recreational smoke are the folks selling you a house, golfing on the ninth hole and probably an editor or two here and there."

Parker, known as a conservative columnist, showed how astute her thinking was when she called for fellow former puffer Sarah Palin to step down as VP nominee in 2008, calling her "clearly out of her league."


As an example, she talked about the first pot case she saw as a prosecutor, with a “...gorgeous lady standing in the middle of the courtroom crying, and I didn’t understand what was going on. They said she was a stockbroker. She had got addicted to pot, ended up losing her job, wrecked her car, couldn’t make her house payments on her house, so her husband got custody of the children, and now she has no house, no car, no family, nothing.” Even if true, she didn't stab or strangle her family. And arguably, stockbrokers are the real criminals in our society.