Asherah: The Tree of Life 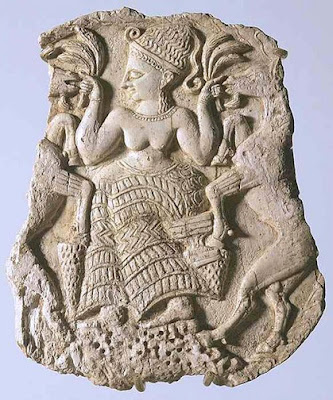 The Canaanite Earth and Mother Goddess, called "Creator of the Gods," is Asherah (also known as Athirat). Consort, sister or mother to the gods El and Baal, the first mention of Athirat is found in Babylonian texts dating to the first dynasty (1830–1531 B.C.). (Source: Judith M. Hadley, The Cult of Asherah in Ancient Israel and Judah).

She is often confused with Ashtart (Astarte), and is sometimes the mother of Astarte, or Ishtar. The Ashtoreth of the Hebrew Scriptures, worshipped along with Baal and reviled for their incense-burning practices in the Bible, may refer to Athirat the Mother Goddess, or to Ashtart. Polish anthropologist Sula Benet, whose 1936 doctoral thesis ''Hashish in Folk Customs and Beliefs'' won her a Warsaw Society of Sciences scholarship for graduate study at Columbia University, theorized that the biblical incense kaneh bosm was cannabis.

Athirat is associated with the Tree of Life. A famous ivory box-lid of Mycenean workmanship found at Ugarit, dating from 1300 BCE, shows Her as symbolically representing the Tree (above) feeding a pair of goats. The Tree of Life, also known as the Tree of Knowledge, appears in the Biblical myth of the Garden of Eden, bearing the forbidden fruit that allows men to think like gods.

"In light of Ashera's recognition as a symbol of the sacred tree and her cult's use of cannabis (Emboden 1972), it is of interest to note that in medieval times, certain Moslem groups refered to cannabis by the name ashirah," wrote Chris Bennett and Neil McQueen in Sex, Drugs, Violence and the Bible.  "They saw it as an endearing term for their hempen girlfriend (Rosenthal 1971)."

Athirat is a key player in the Baal Cycle found at Ugarit (at its height from 1450 BCE to 1200 BCE). We first see her sitting by the sea using a spindle and doing laundry. The rites contained a sacred drink as an offering:

Wine in ancient times is thought to have contained herbs or drugs as well as fermented fruits.

In two places the Baal Cycle alludes to anointing with sacred oil, once when the priestess undergoes a ritual shaving, and secondly when she is returned to her father's house. "Annointing is widely understood as a rite of purification," says Daniel E. Fleming in The Installation of Baal's High Priestesses at Emar. He adds: "The meaning and origin of the practice of anointing have been thoroughly discussed by biblical scholars because the rite is so prominent in account of selecting both kings and priests." In Ugarit times, women were also anointed during wedding rituals and during a ceremony that brought a woman out of slavery as a prostitute. Anointing oils may have contained cannabis, say some scholars. 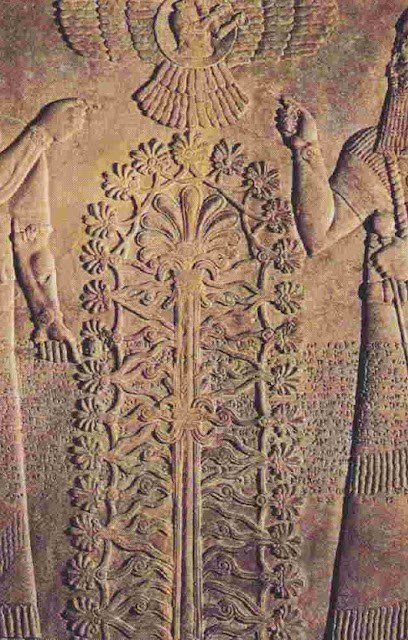 In Biblical times, an Asherah meant a sacred tree or pole to honor the goddess. In the Bible, the Hebrews are repeatedly instructed to destroy all the Asherah poles, even though the goddess was considered a consort of Yahweh. But her sacred tree or pole in the temple at Jerusalem stood for about 240 years until the temple's final destruction in 70 CE.

A relief from the palace of Ashurnasirpal II (883-859 BC) showing an Asherah Tree is surrounded by male figures holding anointing oils. The tree's leaves have seven or nine points, and a large cola-like flower in the middle, like cannabis (see left). The winged figure over the tree might be a precursor to the Holy Spirit, the third member of the Christian trinity.

Some say Asherah is also sometimes shown curly haired, riding a lion, holding lilies and serpents in upraised hands, as Qadashu, as she was known in Egypt. Scholars think Ashoreh or Astarte and Baal were introduced in Egypt somewhere around 1450 BC, during the height of Ugarit. Ugarit had close connections to the Hittite Empire, sent tribute to Egypt at times, and maintained trade and diplomatic connections with Cyprus. 1350 BC Canaan was of significant geopolitical importance as the area where the spheres of interest of the Egyptian, Hittite, and Assyrian Empires converged.

UPDATE 11/15: This modern image of a cannabis harvest, from the Ludlow-Santo Domingo Library, is strikingly similar to the Asherah Tree: 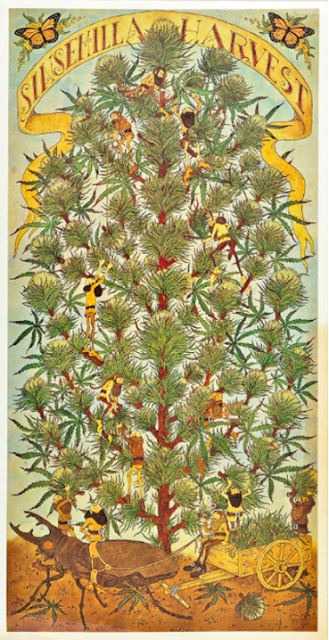