Of Henrietta and Hemp 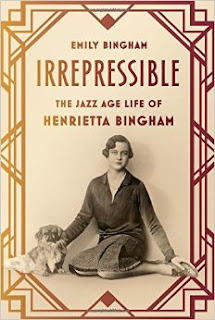 I picked up the new biography Irrepressible: The Jazz Age Life of Henrietta Bingham tonight. Its cover trumpets:

"Raised like a princess in one of the most powerful families in the American South, Henrietta Bingham was offered the helm of a publishing empire. Instead, she ripped through the Jazz Age like an F. Scott Fitzgerald character: intoxicating and intoxicated, selfish and shameless, seductive and brilliant, endearing and often terribly troubled. In New York, Louisville, and London, she drove both men and women wild with desire, and her youth blazed with sex."

Bingham's father was a Kentucky politician, judge, newspaper publisher and ambassador, serving as the US Ambassador to Great Britain in between Andrew Mellon and Joseph Kennedy. She took off to Europe like her possible paramour and Tokin Woman Tallulah Bankhead—the daughter of an Alabama Senator—and became part of the partying Bloomsbury crowd in London.

At the time, London was hip to the jive. In a review called “Light Up” at the Savoy Theatre in 1940, “The sensation of the evening was a dope fiend dance called ‘Marihuana’ which brought the house down.” Another piece called the ‘Hashish Hop’ was described as, “A frighteningly macabre dance which ought to sweep the town.” Source. Welch artist and writer Nina Hamnett, a fringe member of the Bloomsbury Group, "made a conscious effort to lose her virginity, and ended up doing so in the same rooms in Bloomsbury where Verlaine and Arthur Rimbaud had lived in the 1870s. ...She met Ford Maddox Ford and Gertrude Stein, then smoked hashish with Cocteau and Raymond Radriguet." Source. 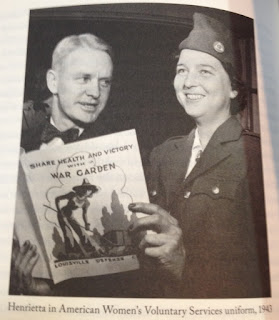 During World War II, Bingham returned to Kentucky and ran a farm. "Henrietta was patriotically growing 'marihuana,' as her Department of Agriculture permit called hemp, to help fill the Navy's demand for rope when hostilities interrupted imports...The hemp crop took up fields she needed for corn to feed the hogs...."

This would make Henrietta the first female farmer I'm aware of who participated in the US Government's "Hemp for Victory" program in the 1940s. She was part of the American Women's Voluntary Services (pictured right, holding a booklet titled, "Share Health and Victory with a War Garden").

By Your Leave, Sir, a wartime pulp romance aimed at recruiting women for service was set on a hemp farm overlooking the Ohio River and drew on Henrietta's life, according to Irrepressible.

I couldn't find anything about Bingham using the more potent form of hemp in the book, only alcohol and Seconal, prescribed by doctors for alcoholism. Her family rather disowned her for her wild ways and one psychoanalyst tried to "cure" her of her homosexual tendencies, contributing, her great niece and biographer concludes, to her death at age 67, "succumbing to a daily cocktail of amphetamines, sedatives, and alcohol."