If you can believe Radaronline via the National Enquirer, Rosie O'Donnell is at risk of losing custody of her 2-year-old daughter Dakota after her ex-wife Michelle Rounds alleged "The View" star is excessively using marijuana and alcohol. She reportedly submitted to a hair follicle test, which came up positive for pot.

If true, this would make O'Donnell, 53, the highest (ha) profile person to face this rather common problem since, perhaps, Paul McCartney.

Although some say marijuana actually can make you a better parent when used wisely, and court rulings have upheld parental rights of medical marijuana users, battling parents often bring up their spouses' marijuana use in custody hearings. The type of testing O'Donnell reportedly underwent can pick up drug use for months after it was last used.

Apparently the story stemmed from a TMZ report that was later denied by Rounds, who told the NY Daily News she is seeking full custody because O'Donnell is too distracted raising her other four children. 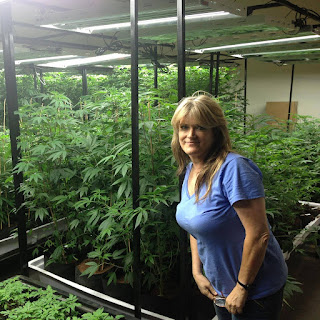 The Enquirer also reports that Susan Olsen, the actress who played little Cindy on "The Brady Bunch," spent years growing and selling marijuana.

“I was, I guess, technically a drug dealer – but I was really a [marijuana] grower,” said Susan, also 53, saying that she grew  the “green stuff” with one of her two ex-husbands.


Susan has apparently changed her Facebook profile picture to one taken in a marijuana garden (right).  This would make Olsen the highest profile actress to admit she grew pot since the Blair Witch Project's Heather Donahue, author of Growgirl.
Posted by Tokin Woman at 10:16 PM