Simone de Beauvoir, the acclaimed French author whose book The Second Sex remains an influential feminist treatise, tried marijuana in New York City in 1947 and wrote about it in her book, America: Day by Day.

“As in all big cities, people use a lot of drugs in New York,” de Beauvoir wrote. “Cocaine, opium, and heroin have a specialized clientele, but there’s a mild stimulant that’s commonly used, even though it’s illegal—marijuana. Almost everywhere, especially in Harlem (their economic status leads many blacks into illegal drug trafficking), marijuana cigarettes are sold under the counter. Jazz musicians who need to maintain a high level of intensity for nights at a time use it readily. It hasn’t been found to cause any physiological problems; the effect is almost like that of Benzedrine, and this substance seems to be less harmful than alcohol.”

De Beauvoir says she was “less interested in tasting marijuana itself than in being at one of the gatherings where it’s smoked.” Her guide into this world was none other than Bernard Wolfe, the writer and jazz aficionado who co-wrote Really the Blues with Very Important Pothead Mezz Mezzrow. As she describes it, Wolfe took her to a pot party at a hotel, and advised her to try smoking herself. She found the taste bitter and unpleasant, and when told she wasn’t inhaling properly, she said it burned her throat. She valiantly tried smoking four cigarettes, she said, and failed to feel any effect. “It seems that I ought to feel lifted up by angels: the others are floating, they tell me—they’re flying.” During the next few days, “I live in a half-dream; perhaps the marijuana smoke insidiously slipped into my blood,” she wrote. While in America, De Beauvoir attended a Louis Armstrong concert with Mezzrow, who she had seen perform in Paris with Don Redman. 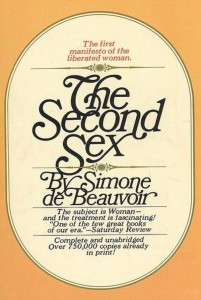 De Beauvoir was 39 years old when she first tried marijuana, by her own account. An interviewer asked her how it was possible, as she recounted in her memoir, that while writing The Second Sex at the age of 40, she "had not previously perceived the female condition you describe?" She answered that she had not been in a situation to notice the treatment of women, but I've got to wonder if somehow smoking marijuana altered her perception, as it seemed to do for Mark Twain, Pablo Picasso and others before they made their creative breakthroughs.

New research is finding that the brain necessarily clicks off our consciousness into a daydreaming state, in order to fully accomplish tasks. This has certain advantages. "[T]he daydreaming mind may make an association between bits of information that the person had never considered in that particular way. This accounts for creativity, insights of wisdom and oftentime the solutions to problems that the person had not considered," researcher Eugenio M. Rothe said in a National Geographic article. Writers have observed that cannabis enhances the imagination, and that this can have an evolutionary advantage. One study found that a moderate dose of alcohol increases the productive meta state, where your mind is wandering but you're not aware of it. Up until lately researchers have generally been funded only to study negative things about cannabis, like that it enhances "novelty seeking" or schizophrenia.

In a rare television appearance from 1975, de Beauvoir displays her intellectual prowess and grasp of herstory. She states (in translation): "In the Middle Ages, and in the Renaissance, the female physician had much power. They knew about remedies and herbs, the "old wives" remedies which were sometimes of great value. Then medicine was taken away from them by men. All of the witch hunts were basically a way for men to keep women away from medicine and the power it conferred. In the 18th and 19th centuries statutes were drafted by men that prevented women—who were imprisoned, fined, etc. —from practicing medicine unless they had attended certain schools, which did not admit them anyway. Women were relegated to the role of nurses, of Florence Nightingale, as aides and assistants."

In The Second Sex, de Beauvoir wrote, "[W]oman is both Eve and the Virgin Mary. She is an idol, a servant, source of life, power of darkness; she is the elementary silence of truth, she is artifice, gossip, and lied; she is the medicine woman and witch; she is man's prey; she is his downfall, she is everything he is not and wants to have, his negation and his raison d'etre....behind the sainted Mother crowds the coterie of white witches who provide man with herbal juices and stars' rays: grandmothers, old women with kind eyes, good-hearted servants, sisters of charity, nurses with magical hands...."

It's time to reclaim woman's healing power, and her healing herbs.