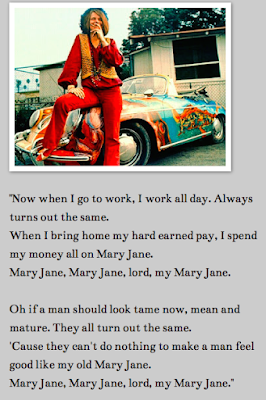 In a gentler world, Janis Joplin would have turned 70 today.

I just came across a Dick Cavett episode filmed just two months before her brightly burning candle burned out. Janis gives an astonishing performance of "Half Moon," showing she's in full control of her tight-as-a-drum band, the aptly named Full Tilt Boogie.

Afterwards, she stands up for pot to fellow guest Gloria Swanson, talking about repression in the 1920s when Swanson was making movies. "Back then you couldn't drink because they didn't like it. Now you can't smoke grass," Janis said. "Back then you couldn't be a flapper because they didn't like it, and now you can't play rock and roll ...It seems to me that people who went through all that prohibition and flapper times should realize that young people are always crazy, and to leave us alone." The audience applauded their agreement.

Just afterwards, Cavett promises his audience a lift from the following Pepsi commercial. Nowadays Beyonce, whose daughter with Jay-Z was honored with a medical marijuana strain named for her days after she was born, has taken criticism for pushing Pepsi at the upcoming Superbowl. Too bad she can't promote something actually uplifting. 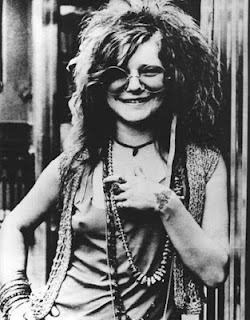 I saw this picture of Janis at a Mill Valley record store once years ago, in front of which was planted a little girl demanding to know who she was.

At the 2005 Grammy Awards Joplin was honored by VIPs Joss Stone (who looked the part) and Melissa Etheridge (who sounded it). There will never be anyone, anywhere, like Janis, but her torch has been passed to a new generation.