Why the US is More Gosford Park Than Downton Abbey 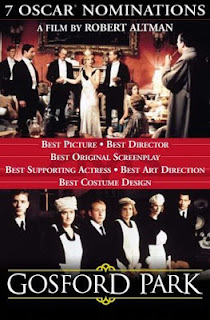 The Colbert Report has picked up on Fox News's absurd praise of Downton Abbey and its job-creating serf system.

But that system was prettied up mightily for TV. The 2001 movie from which the series is based, Gosford Park—also written by Julian Fellowes and, unlike the sanitized TV version, directed by VIP Robert Altman—paints quite a different picture of the aristocracy.

An upstairs/downstairs story set in the same time period as Downton, Gosford Park also stars Maggie Smith as the blunt and bossy matriarch and also has three daughters--two beautiful, one not--plus a shy, stringy haired and obsequious servant intrigued by a nasty blue-eyed valet; a slim and stately blonde servant who knows her place; and a comely, earnest daughter with a brunette bob involved in an inappropriate clandestine affair. Even the sets are nearly identical, down to the candlesticks.

In Gosford, the Lord is rather a monster who so mistreats his help that he gets his comeuppance at their hands, doubly so. The Lady is not, in any sense of the word, a lady. Smith's character enjoys dishing with the servants, and uses them for spies. The help truly dislikes their overlords, knowing full well that they are unfairly treated workers.

Gosford Park won nearly every Best Director award worldwide and Fellowes picked up an Oscar for Best Screenplay. Co-producer was Bob Balaban, who plays the American movie director in the film, and also did a cute guest spot as a medical marijuana doctor on HBO's Entourage. The TV version of Gosford, with aristocrats who care about their servants, is a PBS fundraising monster praised for its authenticity of set and costume design.

Americans have a warped view that all of us will be rich someday: boys want to be Michael Douglas in Wall Street and girls still believe in Prince Charming (hell, they're all dressing like slutty princesses now). Even during the Great Depression, the favorite board game was Monopoly, in which the winner takes all, to hell with the rest of the players. As I learned on Netflix recently, Monopoly was first invented by Lizzie Phillips in 1923 as The Landlord's Game, to illustrate the downside of concentrating land in private monopolies. If you doubt the inequities of our system, you can also see the 2006 documentary The One Percent on Netflix.
Posted by Tokin Woman at 8:17 AM