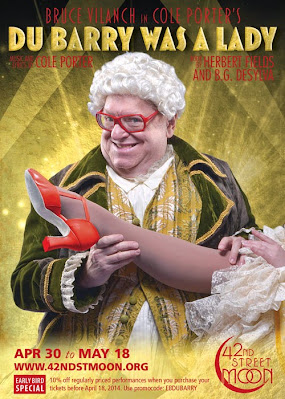 "Come and see my collection of Turkish hookahs."

So states a female character in Cole Porter's play "Du Barry Was a Lady," now on stage in San Francisco in a delightful adaptation starring Bruce Vilanch.

Packed with Porter's witty lyrics and beautiful melodies, the play was first produced on Broadway in 1939 starring Bert Lahr, Ethel Merman, and WWII pin-up girl Betty Grable as the character who uttered the hookah line. Lucille Ball starred with Red Skelton, Gene Kelly and Zero Mostel in the 1943 movie version.

Vilanch—who's written comedy bits for Bette Midler, Whoopi Goldberg, Robin Williams, Billy Crystal, Roseanne Barr and Lily Tomlin, among many others—is something of a modern wit and bon vivant in the tradition of Porter and Coward. "He's given more great lines to celebrities than a Hollywood coke dealer," quipped Nathan Lane in Get Bruce, a 1999 documentary on Vilanch now playing on Netflix.

Graduating from Ohio State with degrees in theatre and journalism during the turbulent 60s, Vilanch was brought out to Hollywood by studio executives looking to shape the new direction of film during the Easy Rider daze. "Everyone was wearing beads and paisley shirts," Vilanch recalls in the documentary, adding, "We were all sitting in a room together smoking dope and talking about the movies and I thought, 'This is a business I really want to be in.'"

Likewise, Porter and his set were no strangers to various delights. Starting in 1923, Cole and his wife Linda rented palazzos in Venice, including the Palazzo Rezzonico once inhabited by Robert and Elizabeth Barrett Browning.
Joining them there was the famed hostess Elsa Maxwell, who invented the scavenger hunt and other enticements that brought the rich and famous together. With Maxwell spreading the word, prominent figures like Tallulah Bankhead, Noel Coward and Fanny Brice came to Venice's Lido shoreline to enjoy its daytime amenities and nightly parties.

"Hard drinking was commonplace at these festivities, as was the use of drugs of all kinds, including opium, cocaine, and hashish," wrote Porter's biographer Charles Schwartz, who added, "A greater sensualist than most of his friends...Cole never hesitated trying drugs or practically anything else for kicks while socializing." Indeed, Porter's song, "I Get a Kick Out of You" has the lyric "I get no kick from cocaine" (sometimes sung as "champagne").

The party was over in 1927 when police raided the Palazzo and found several local young men, including the son of the police chief, parading about in Linda Porter's dresses. Later, the principality of Monaco employed Maxwell's services to put it on the map as a tourist destination as she had done for the Lido. "Her imprimatur of social acceptability carried so much weight that the Waldorf Astoria gave her a suite rent-free when it opened in New York in 1931 at the height of the depression, hoping to attract rich clients because of her." (Schwartz)

While living in Los Angeles in 1944, Porter dated Bob Bray, a Marine from Montana who was friendly with Porter's longtime amour, choreographer Nelson Barclift. Porter's biographer William McBrien wrote that Bray and Barclift "were always high on marijuana" and that both came often to Porter's Brentwood home for lunch. According to McBrien, Porter's song "You'd Be So Nice To Come Home To" was written for Barclift.
In 1956, Porter contributed music and lyrics to "High Society," the musical version of "The Philadelphia Story" that opened with VIP Louis Armstrong and starred his pot-smoking buddy Bing Crosby.


As for Grable, her last musical was Three for the Show (1955) about a woman who must choose between two husbands, played by Jack Lemmon and Gower Champion. It featured a production number starting with Grable dressed in an Arabic costume smoking a hookah and dreaming of having a harem of husbands.
For Nymph Errant, a 1933 musical about a young English lady intent upon losing her virginity that received its US premiere in 1982, Porter penned "Experiment," sung by Man We Love Kevin Kline as Porter in De-Lovely:
Before you leave these portals
To meet less fortunate mortals
There's just one final message
I would give to you
You all have learned reliance
On the sacred teachings of science
So I hope, through life you never will decline
In spite of philistine Defiance
To do what all good scientists do
Experiment
Make it your motto day and night
Experiment
And it will lead you to the light
The apple on the top of the tree
Is never too high to achieve
So take an example from Eve
Experiment
Be curious
Though interfering friends may frown,
Get furious
At each attempt to hold you down
If this advice you'll only employ
The future can offer you infinite joy
And merriment
Experiment
And you'll see
Posted by Tokin Woman at 10:54 AM

As another tokin woman I enjoyed this article. I came across it doing research on my grand Uncle, Nelson barclift. Now I find that he was not only gay but I toker to boot!

I'm glad you enjoyed it and learned something about your uncle! He may have been into psychedelics too: his Wikipedia page says: "Barclift is mentioned by Christopher Isherwood in his diary entry for April 15, 1968, when he visits Isherwood and asks him to be in a television programme with Laura Huxley (the widow of Aldous Huxley; both of them spoke about psychedelics).