Seshat – Goddess of Knowledge and Cannabis 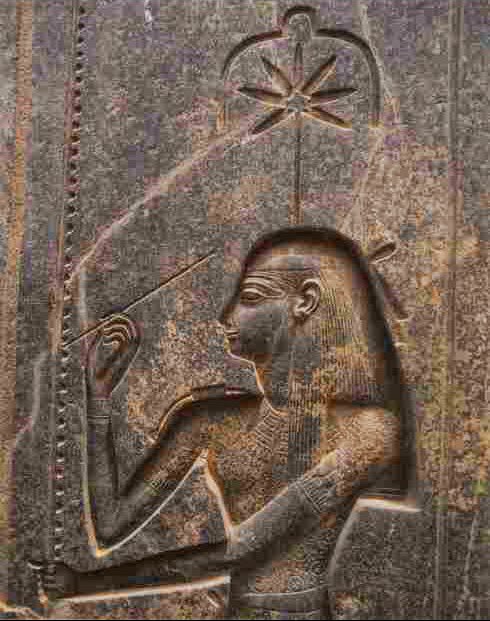 Seshat (also spelled Safkhet, Sesat, Seshet, Sesheta, and Seshata) was the ancient Egyptian goddess of mathematics, creative thought, knowledge, books and writing (her name means "she who is the scribe"). Sister to Bast and daughter/sister/wife to Thoth or the moon god Djehuti, the Egyptians believed that she invented writing, while Thoth or Djehuti taught writing to mankind.

In this relief (below), she wore her Seven Pointed Leaf to perform the equivalent of laying the cornerstone of the Great Pyramids – "stretching the cord" to mark the direction of true north, calculated by the stars, with a rope made from hemp. It is perhaps hemp's psychoactive effect that is acknowledged in the saying that, "Seshat opens the door of heaven for you."
Ancient Egypt is considered to be an advanced civilization in medicine and many other realms. As far back as 2350 BCE, the stone tablets known as the Pyramid Texts used the hieroglyphic symbol smsm.t—or “shemshemet”—referencing “a plant from which ropes are made,” thought by Archeologist W.R. Dawson to be hemp. The Ebery Papyrus from 1550 BCE, and likely copied from earlier manuscripts, mentions introducing shemshemet ground in honey into the uterus, possibly as an obstetric aid. "It has parallels to therapeutic applications of cannabis as a vaginal suppository in the 19th century to treat gynecological disorders and migraine," writes Ethan Russo in a 2007 paper.

Seshat was associated with Isis in the Late period, and was scribe to Hatshepsut, the female Pharoh of the 18th dynasty (c. 1479-1458 BCE). The Greeks demoted the Goddess to a muse, and in Phaedrus, Plato gives over to Thoth the invention of arithmetic and letters.

Seshat's name has been given to the Global History Databank at the Evolution Institute and Sesheta.net is the name of the African Women's Autobiography project.
Posted by Tokin Woman at 8:38 PM