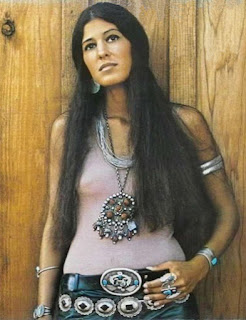 Singer Rita Coolidge, known for her 1977 hit "Higher and Higher," has just, at the age of 70, published an autobiography called Delta Lady.

In it, Coolidge recounts her adventures touring as a musician in the swinging 1970s, when she dated Leon Russell, Graham Nash and Steven Stills, and married Kris Kristofferson.


She also had adventures with marijuana, starting as an art student at Florida State. "We always had a lot of weed," she writes, "which we’d decided was vital to the creative process, thanks to this guy who came through Tallahassee every year, like Johnny Appleseed, to plant pot and would tell a couple of people on campus – in the art department, of course – where it was planted."

Later she noticed that in LA, "the drug menu was shifting from pot and LSD, which put people in a sharing mood" to cocaine, after which, "People just lost their moral base. It made criminals and liars and thieves out of people who previously loved and trusted one another."

After she and Kristofferson hooked up, Rita writes about them going to Disneyland with Willie Nelson and his wife Connie after, "As it happened, I had just baked a really nice batch of marijuana brownies...."

Of Kristofferson, she wrote, "He was a heavy drinker and loved to smoke pot." Indeed, Kristofferson was probably the original hippie outlaw country musician.
Also revealed in the book is the fact that she co-wrote the piano coda to "Layla," but was uncredited when her co-writer Jim Gordon took the song to Eric Clapton.

In 1983, Coolidge was picked to sing the theme song "All Time High" for the James Bond movie Octopussy. Coolidge recalls that Barbara Broccoli, daughter of producer Cubby Broccoli and herself the assistant director of Octopussy, was a fan of Coolidge and made a point of playing her records around her father until "one day [he said], "Who is that? That's the voice I want for the movie." The chorus of "All Time High" features a lyric similar to that of Coolidge's #2 hit "(Your Love Has Lifted Me) Higher and Higher" whose lyric "When you wrap your loving arms around me I can stand up and face the world again" is echoed by the "All Time High" lyric "We'll take on the world and wait."