It's no surprise that modern screen Goddess Marilyn Monroe was born in June 1, the first day of the month named for the goddess Hera/Juno.

A talented singer and dancer, Monroe exuded sex as no one before, or since. Just see her cameo in the Marx Brothers' Love Happy, or her opening number in There's No Business Like Show Business. Or her songs in River of No Return with Robert Mitchum. Or her powerhouse performance in a movie she produced, The Prince and the Showgirl. And yes, that was her playing ukulele in Some Like It Hot.

A foster child quite probably abused by both men and women in her youth, Norma Jeane Mortenson worked her way to the top of the entertainment business, no easy feat. She was the first actress since Mary Pickford to form her own production company and (literally) call her own shots.

Having married the top athlete perhaps ever (Joe DiMaggio), she surprised everyone by next marrying playwright Arthur Miller, who soon was called before the HUAC committee during the shameful Red Scare of the 1950s. Monroe stood by her man, drawing cameras to her as she bravely appeared with her husband. 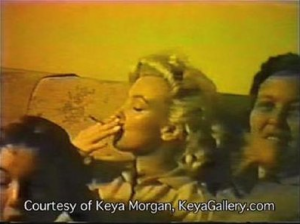 Around this time, in a home movie released in 2009, Marilyn apparently smoked marijuana at a party in New Jersey. According to Keya Morgan, who purchased the film for $275,000, the filmmaker (named Gretchen), told him she "rolled up the joint and handed it over to Marilyn."

Tony Curtis, Monroe's co-star in Some Like It Hot, was brilliant as a swarmy PR flack who tries to smear a jazz guitarist as a pot-smoking commie in Sweet Smell of Success (1957). Curtis was caught with marijuana at London's Heathrow Airport in 1971, when he flew to London for an anti-tobacco appearance. 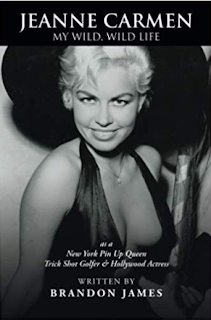 Monroe's friend Jeanne Carmen's son and biographer confirmed to me that both she and Monroe smoked pot. An actress, pin-up girl, and trick-shot golfer, Carmen lived next door to Monroe in the years before she died in 1962. The apartments were owned by Frank Sinatra, as described in valet George Jacobs' book Mr. S.: My Life with Frank Sinatra.

Carmen died in 2007, but her son Brandon James writes, "My mom was not a 'pot smoker' but she did smoke pot on occasion. Marilyn was the same way." James traveled with his mother to events in the 1990s, and gathered her experiences in Jeanne Carmen: My Wild Wild Life (2006).

Blonde pot-puffing love interests appear in two seminal Hollywood novels, The Day of the Locust and The Last Tycoon, see Can L.A. Solve Its Mexican Marijuana Problem? Not Until It Confronts Its Past.
Posted by Tokin Woman at 3:15 PM