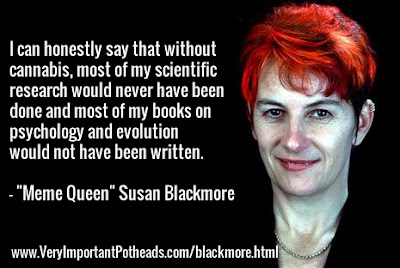 Today is the 70th birthday of psychologist and meme queen Dr. Susan Blackmore, author of the bestselling book The Meme Machine, who has over 900,000 views on her TedTalk on "Memes and Temes."

Blackmore appeared at the 2005 Cheltenham Science Festival to discuss whether drugs can teach us anything about ourselves. A version of her talk was published in the Daily Telegraph on May 21 of that year. In it, she says,

"Some people may smoke dope just to relax or have fun, but for me the reason goes deeper. In fact, I can honestly say that without cannabis, most of my scientific research would never have been done and most of my books on psychology and evolution would not have been written. . . .

"Some evenings, after a long day at my desk, I'll slip into the bath, light a candle and a spliff, and let the ideas flow - that lecture I have to give to 500 people next week, that article I'm writing for New Scientist, those tricky last words of a book I've been working on for months. This is the time when the sentences seem to write themselves. Or I might sit out in my greenhouse on a summer evening among my tomatoes and peach trees, struggling with questions about free will or the nature of the universe, and find that a smoke gives me new ways of thinking about them." [Sounds similar to Carl Sagan's experience.]

"In just about every human society there has ever been, people have used dangerous drugs – but most have developed rituals that bring an element of control or safety to the experience," Blackmore continued. "In more primitive societies, it is shamans and healers who control the use of dangerous drugs, choose appropriate settings in which to take them and teach people how to appreciate the visions and insights that they can bring. In our own society, criminals control all drug sales. This means that users have no way of knowing exactly what they are buying and no-one to teach them how to use these dangerous tools. . .

"It's an old metaphor, but people often liken the task to climbing a mountain. The drugs can take you up in a helicopter to see what's there, but you can't stay. In the end, you have to climb the mountain yourself – the hard way. Even so, by giving you that first glimpse, the drugs may provide the inspiration to keep climbing."

In a 2019 lecture she gave on "The Science of Out of Body Experiences," Blackmore spoke about being a fan of psychologist William James, who used nitrous oxide to expand his consciousness, saying, "Freud came along and ruined everything....we'd have got to spirituality and psychology much quicker." In 2020, Scientific American interviewed her for an article titled, "How to Be a Mystical Skeptic." Her website has links explaining, "Why I support the legalization of drugs and Anyone’s Child – families against the War on drugs."

Writing to wish her a Happy Birthday via her Facebook page, I got this response from her assistant: "Susan Blackmore is taking an extended sabbatical due to ill health and will only gradually return to work in 2021." We wish this exceptional Tokin' Woman a speedy and full recovery, and many more years of consciousness.

It's crazy to think about how many famous people in history have used cannabis.