Did Frida Kahlo Use Marijuana?

I have been for years trying to track down any reference to Frida Kahlo using marijuana. The closest I have is a reference (via Errol Flynn) that Kahlo's husband Diego Rivera used it, and shared it with others.
Judy Chicago in her book Frida Kahlo: Face to Face says that the cigarette Kahlo holds in a holder in her 1938 painting Itzcuintli Dog with Me is a marijuana one.  Xoloitzcuintli dogs, named for the Aztec god of lightning and death Xolotl, were owned by Frida and Diego; one shows up in her epic painting The Love Embrace of the Universe, the Earth (Mexico), Me, Diego, and Mr. Xolotl (1949). According to Aztec belief, the Dog of Xolotl guards the living and guides the souls of the dead through the dangers of the Underworld.
Elsewhere it’s assumed it’s a tobacco cigarette Kahlo holds in her paintings (e.g. Portrait on the Borderline Between Mexico and the United States, 1932; Me and My Parrots, 1941). She was often photographed holding a cigarette, even in her wedding portrait.
I found this intriguing tweet from the Museo Frida Kahlo that seems to agree she’s smoking mota (marijuana) in this Gisele Freund photograph, circa 1950: 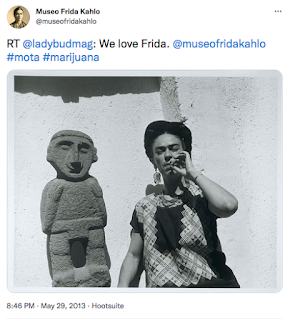 Carol McCusker, who curated a 2016 exhibit of photographic portraits of Kahlo, is quoted here saying, "Today, Kahlo represents a lot of what some believe threatens our culture: She was a communist, ethnic Mexican, feminist, [disabled], bisexual, a marijuana smoker, outspoken, and she demonstrated for workers’ rights." I reached out to Dr. McCusker, but she couldn't recall offhand where in her extensive research she made the determination that Kahlo was a marijuana smoker.
Some of Kahlo's work could be considered spiritual if not psychedelic, e.g. Sun and Life (1947), which anthropomorphizes plants, and Flower of Life (1944), which seems to depict herself as a flower, something she called herself in letters.
Critic Frances Borzello found Kahlo's portrait of Dr. Leo Eloesser (1931) "hallucinatory" in its exaggeration of the size of the doctor's head; but Chicago thinks that might be just an accidental product of poor drawing. Another early painting (Pancho Villa and Adelita, 1927) depicts herself as a soldadera to Villa's army (possibly the inspiration for the song "La Cucaracha.") Her epic Moses (1945) should have been a mural but instead is a small painting depicting religious leaders and thinkers throughout history. 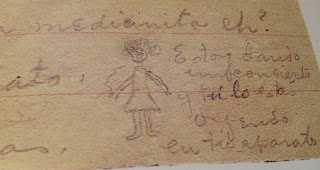 Considering the extensive injuries and pain Kahlo lived with throughout her life, she could certainly have found marijuana's pain-relieving properties helpful. Possibly this drawing (right) from an early letter she wrote to her boyfriend Alejandro Gomez Arias around the time of her streetcar accident indicates a medical use. She was said to have asked for cigarettes (again, presumed to be tobacco) on her deathbed.
A cannabis strain named for Frida, bred by Washington-based Raven Grass company, "is a blessing for medical patients due to high, up to 12% CBD levels. Frida marijuana is good for day and evening time use due to strong medical properties."
I have found no reference to Kahlo's marijuana use in her (English-language) biographies; perhaps some reader who speaks Spanish could find one elsewhere?
Posted by Tokin Woman at 11:39 AM