Woody Harrelson Does Right By Cannabis Farmers in California

Today in Los Angeles, the Emerald Cup Awards will be held, recognizing the fine cannabis grown by small outdoor farmers of California. One of the judges of the awards is actor/activist Woody Harrelson, and the event kicked off with the opening of The Woods, Harrelson's new West Hollywood pot shop. My Facebook feed lit up last night with photos of Emerald Triangle farmers taken with the affable star, who wore a "Sun+Earth Certified" cap.

"We were surrounded by our friends from Humboldt and Mendocino including Tina from @moonmadefarms, @chrystalortiz, Aiyana of @humboldt_synchronicitrees, to name a few, activist and educator @luna_stower from the SF Bay, as well as wonderful LA movers and shakers, long time friends of Woody’s from the earliest days of his career, to his collaborators and enablers of his lifelong environmental activism. The room was buzzing with vitality," wrote activist Cara Cordoni. Also on hand was Nancy Birnbaum of Sensi Magazine, Tim Blake of The Emerald Cup, and Bill Maher, one of Harrelson's partners in The Woods who seems to have talked him into going back to smoking pot after he gave it up a few years back.

“The bulk of what people want is indoor chem weed,” Harrelson told LA Weekly in April. “Now, we’re gonna carry that at The Woods because I don’t want to, certainly in the beginning, alienate any potential customers. But my dream is to promote and to help people see the sensibility in sun-drenched herb, because I feel like you want that sun energy.... Outdoor organic is amazing. That’s where all of us should be putting our sights. The outdoor organic herb should be the crème de la crème."

Harrelson's environmental activism has included scaling the Golden Gate Bridge in 1996 to hang a banner protesting the logging of ancient redwood trees by greedy capitalist Charles Hurwitz.  That same year, he was also arrested on purpose for symbolically planting four hemp seeds in Kentucky, a move that brought hemp farming and its environmental advantages to the national press. He travelled the country on a bike in caravan with a hemp-oil-fueled biodiesel bus, lecturing at colleges and festivals, and narrated the excellent 1999 documentary Grass: A Marijuana History.

Harrelson told Bezinga last month: “It's kind of amazing because, to be honest, I never thought we would get to this stage. I never thought it would be legal, much less that I could go buy it at a store. So it's very exciting. I don't take much credit for it, but a lot of people have worked really hard to get it."

I met Woody while dressed as a hemp fairy handing out flyers at a Terrence McKenna lecture in Santa Monica in 1992, and connected him with Chris Boucher of The Hempstead Company, from whom he ordered hemp fanny packs as presents for the cast and crew of his film An Indecent Proposal, co-starring Demi Moore and Robert Redford. I couldn't make yesterday's party, having been too busy lobbying in Sacramento for bills like AB 2691, which would allow small farmers to sell direct to consumers at events like the Emerald Cup.  But it's great to see important connections being made. 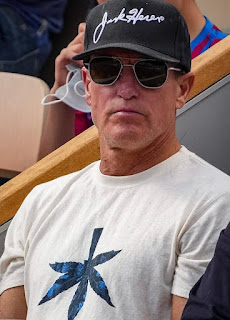 Harrelson recently narrated the documentary Kiss the Ground about regenerating the world's soils to address the climate crisis. He stressed to LA Weekly that, "The bigger outdoor farms get, the further away they get from the advanced permaculture and sustainability practices he would like to see." Maher noted on Real Time last night that Fire Season has already begun in California, with fires consuming multi-million dollar homes in Laguna Woods. It's high time to get serious about fixing our climate, and we can start with where we buy our weed.

UPDATE: Harrelson was given the Willie Nelson Lifetime Achievement Award at the Emerald Cup ceremony. Nelson's cannabis brand Willie's Reserve supports independent farmers. It may have been Willie who coaxed Woody off the weed wagon.

Dude represented at the French Open with a Jack Herer hat (left).