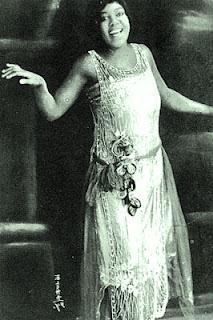 Born to a large, poor family in Chatanooga, Tennessee, Bessie joined a travelling minstrel show at age 14. Bessie was soon performing on stages all over the country as The Empress of the Blues. In 1933, Smith recorded "Gimmie a Pigfoot," featuring Benny Goodman and Jack Teagarden, for John Hammond's Okeh record label. In the last verse Smith sings, "Gimmie a reefer" in this video. Louis Armstrong wrote of her, circa 1929, "I shall never forget her, and her Dance. --She was so wonderful in her 'Shake dance she would take 5 and 6 Encores."

In his 1974 autobiography, Berle says of Cook, "She was known as one of the greatest belly dancers in the world, and her act was sensational, with everything going like a flag in a hurricane. She was one of those rare women that men had only to look at to want. And that was even standing still. She was slender, and light-skinned like the color of coffee with too much cream in it, and she had her hair in an Afro, which wasn't standard gear then. When she worked, she covered her body with oil that made it shiny and sexy-looking." 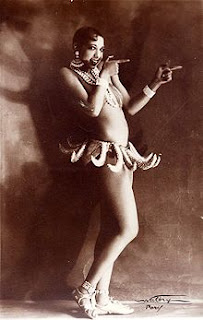 Cook didn't fare as well as a more famous dancer, Josephine Baker, who also indulged in marijuana, according to Josephine: The Hungry Heart by Jean-Claude Baker and Chris Chase. Phillip Leshing, who was then a 23-year-old bass player in Buddy Rich's orchestra, recalls in the book, "I remember once Josephine invited several of us to come to her dressing room and try some very good reefer. I went down with Harry 'Sweets' Edison, the trumpet player, and Buddy Rich, and we smoked pot with Josephine Baker...but the marijuana didn't affect her performance. Never." (p. 295)