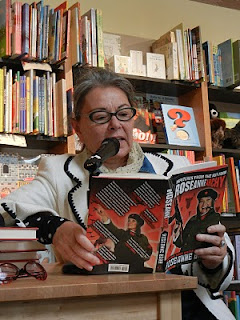 Reading at Books Inc. in Berkeley on Sunday from her new book Roseannearchy Roseanne Barr laughed, she cried, and she displayed more compassion and common sense than all the politicians in Washington put together.

Barr has been making the talk show rounds, appearing with everyone from Joy Behar to Bill O'Reilly (she got Bill on board with a Charity Farm). She implored politicians to "stop dividing us against each other so you can rob us." The solution, she said, was to be kind to each other. "We can break free the minute we start sharing."

The no-nonsense Roseanne said she's gotten off Facebook because she realized it's "Satanic....I was thinking I was doing something when I wasn't." Instead, she blogs at Roseanneworld.com and invites all to meditate with her at 2AM on Friday night/Saturday morning (she posts her present time zone on her site). She spoke of the Sufi phrase, "That which occurs before that which transpires" and said, "Let's be that something."

There are a couple of references to the "Herb of the Goddess" in Roseannarchy. I recommend all buy and read the book to find them. She calls weed "the only drug that should be legal. In fact, it should be mandatory" (a line she borrowed from the great Bill Hicks).

Read more about Roseanne.
Posted by Tokin Woman at 5:38 PM