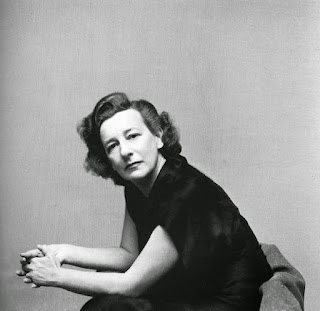 Writer Lillian Hellman has been publicly nominated as a Very Important Pothead / Tokin' Woman by journalist Fred Gardner, who wrote in Counterpunch that he helped Hellman get marijuana to treat her glaucoma in the 1970s.

Gardner wrote me in an email, "I knew her very well '61-'71...The drink at the Huntington [when he suggested she try medicinal marijuana] was probably '77 or '78." He added, "Lil said she used mj when she was around people who used it. As in 'Whenever I'd be at a dinner with Gene Krupa...' "

According to the 1986 book Lillian Hellman: The Image, The Woman by William Wright, Hellman was a bit of a cougar in her later years, enjoying the company of young single men in New York in the mid-1970s "with a leaning towards the sort of outrageousness that produced the hearty Hellman belly laugh." At one gathering, Wright writes, "one of the company persuaded Hellman to smoke marijuana." The evening was "a raucous success" and Hellman had to be dissuaded from taking a walk down Park Avenue at 2AM by herself.

Hellman's most famous plays include The Children's Hour (1934), The Little Foxes (1939), and Toys in the Attic (1960). Tokin' Woman Tallulah Bankhead starred in the original production of The Little Foxes, a revival of which starring Anne Bancroft was directed by Mike Nichols; Elizabeth Taylor earned a Tony nomination for her performance in the play in 1981 (her Broadway debut), and Laura Linney and Cynthia Nixon co-starred in it in 2017. Hellman's memoir Pentimento (1973) was the basis for the 1977 movie Julia, in which Jane Fonda fittingly played her. (The film also features an early appearance by Meryl Streep.) A cocktail party she gave for George McGovern may have given him the idea to run for president.

Hellman had a 30-year relationship with "Thin Man" writer Dashiell Hammett, and the two lived in a hotel managed by VIP Nathanael West in LA. She was blacklisted by the movie industry after telling the House Un-American Activities Committee (HUAC) in 1950: "To hurt innocent people whom I knew many years ago in order to save myself is, to me, inhuman and indecent and dishonorable. I cannot and will not cut my conscience to fit this year's fashions." (This quote was rephrased and put in the mouth of a man in the film Trumbo; Hellman once got angry at Sue Mengers for quoting it in a lesser context.)

Hellman died in 1984 but remains current: On the red carpet at the Golden Globes on Sunday, "Mad Men" star Elisabeth Moss said she's appearing in London with Keira Knightley in Hellman's The Children's Hour.