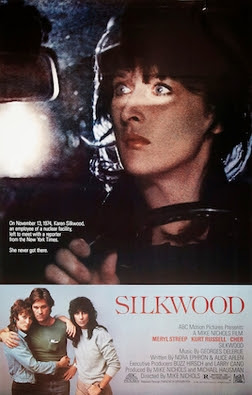 When Mike Nichols, who directed the 1983 movie Silkwood, died days after the 40th anniversary of the death of Karen Silkwood, I decided to look up the connection between Karen and cannabis.

I've noted that in the movie, Karen (played by Meryl Streep) shares a joint with her boyfriend (Kurt Russell) and roommate (Cher) in the same car where she dies after suspiciously going off the road into a ditch. A manilla envelope carrying documents about corruption at the Kerr-McGee plutonium processing plant where she worked were never found afterwards, but investigators did find two marijuana cigarettes in the pocket of her coat.

Karen's death at the age of 28 led to a national discussion into nuclear plant safety, the ultimate closure of the Oklahoma plant where she worked, and a million-dollar settlement in a lawsuit brought by her family against Kerr-McGee.

Mike Nichols made his start as part of a breakthrough comedy duo with Elaine May. "To me, a moral issue is always so much more interesting than a real issue," is a line from their watercooler conversation sketch.

Mendocino-based performance artist extraordinaire Sherry Glaser recalls meeting Nichols while he was directing Whoopi Goldberg's one-woman Broadway show in the 1980s. "I got a ride from him to her birthday party. He asked if I'd be offended if he smoked a joint on the way," Glaser recalls. "He was a wonderfully funny man."

Nichols took an Oscar for directing The Graduate and, as he did with Cher, boosted Melanie Griffiths's acting career with Working Girl. His films include Gilda Live, starring Gilda Radner, and Birdcage with Robin Williams; he directed Philip Seymour Hoffman on Broadway in Death of a Salesman in 2012. He was married to TV newscaster Diane Sawyer.

Silkwood helped immortalize the courageous Karen Silkwood. Did her pot smoking make her more attuned to the greater issues around her, as so often happens with the cannabis-initiated? (Or as John Stewart seemed to say, being high makes you open to the message.) If so, it's one more reason why marijuana is considered dangerous to the status quo, and why it's so important for all of us to get past the cruel prejudice against it.
Posted by Tokin Woman at 7:54 PM