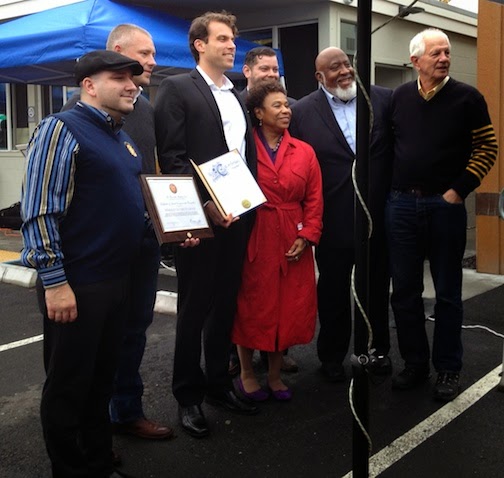 Congresswoman Barbara Lee has been out and about these days. She appeared on Real Time with Bill Maher, then hula hooped with Stephen Colbert (just before he celebrated Washington DC's legalization of marijuana).

The only Congressperson to vote against the Iraq war (or more specifically, the blank-check ability for any President to wage war indefinitely), Lee is no stranger to courageous positions. So it was fitting that she was present to celebrate the 15th anniversary of Berkeley Patient's Group, a medical marijuana dispensary in her district (pictured).

Lee presented BPG with a Congressional recognition, just after watching them donate $10,000 to the local Women's Cancer Resource Center. We don't celebrate our sheroes often enough on this blog, or elsewhere, so here we recognize the good Congresswoman, whose constituents like to say, "Barbara Lee speaks for me."

Pundits are scratching their heads over the Republican landslide midterm election that also saw marijuana measures carry in Oregon and Alaska, as well as DC and a score of cities and counties in Michigan, Maine, Massachusetts and New Mexico. In addition, California and New Jersey passed key criminal justice measures defelonizing crimes like drug possession.

All seven of NORML PAC’s publicly endorsed candidates for the US House of Representatives won decisively, including New Jersey's Bonnie Watson Coleman. Pennsylvania's anti-marijuana Republican Governor Tom Corbett got trounced by Democratic challenger Tom Wolf, who is friendly to marijuana. In California, Lee won handily but three of the worst-voting Democrats on marijuana matters got the boot:  Assemblymembers Steve Fox of Palmdale, Sharon Quirk-Silva of Fullerton, and Al Muratsuchi from Torrance. And Colorado's Democratic governor John Hickenlooper, who retained his seat, announced he would be giving a rebate to state voters after bringing in $50 million in tax revenues from legal marijuana.

The message is clear: supporting marijuana reform is no longer a third rail in politics, and being against this emerging voting block might just get you an early retirement from public life.

MORE ON THE MEDIA
Maher smoked his interview with Kal Penn, who starred as a pothead in the Harold and Kumar movies, and also worked in the Obama administration. Asking Penn to nudge Obama on pot, Maher rightly pointed out, "He must know that there's a lot of people who can't vote, can't get housing, can't do a lot of things, get jobs because they have that on their record, that he could have on his record because of what he did. And that's just a hypocrisy I don't think he should be able to live with."

Interviewing rising Democratic star Sen. Kristin Gillibrand, Colbert asked, since marijuana is now legal in DC, might that have a positive effect on the hostility in Washington. "Maybe it would help if you and Mitch McConnell got together and smoked pot," he joked. But although Colbert enjoined Obama to "appoint yourself Commander in Spleef," Obama spoke about sharing a bourbon instead with McConnell, who represents the hemp-growing state of Kentucky.

Stay tuned: CelebStoner ‏reports that Very Important Pothead Woody Harrelson will host Saturday Night Live on 11/15, and Tokin Woman Cameron Diaz will do so the following week (11/22).
Posted by Tokin Woman at 12:44 AM