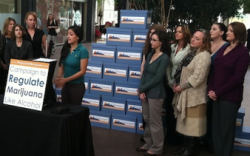 An article by John Ingold of The Denver Post published on January 5 is titled, "Colorado Effort to Legalize Marijuana Turns in Signatures, Tackles Skepticism From Female Voters."

It begins, "If a campaign to legalize limited possession of marijuana in Colorado is to succeed, it will have to make inroads into skepticism by women, according to a recent poll. Perhaps that's why supporters of the campaign put more than a dozen women front and center at a news conference Wednesday as they turned in about 160,000 signatures to put the legalization initiative on the ballot."

So, it's not possible that these women actually lead the campaign? They were just figureheads for the signature turn in, propped up by other "supporters"? Really, John? Way to strike a blow for equality.

In the article, Wanda James — owner of the medical-marijuana-infused- food company Simply Pure — said the showing was intended to counter "a misconception that young men are driving the legalization of marijuana and the cannabis movement."

"It's time for this change," James said. ". . . And it's time for women to lead the fight." The Denver-based Women's Marijuana Movement is part of the coalition that gathered signatures.

But it seems to some women will always be mere spokesmodels.
Posted by Tokin Woman at 8:51 AM