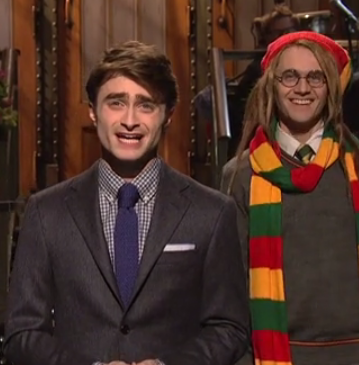 Actor Daniel Radcliffe went so far as to appear nude onstage in Eqqus to shed his his wholesome image as Harry Potter. Now, fresh from his Broadway role in How to Succeed in Business Without Really Trying, Radcliffe showed some acting chops as Saturday Night Live's host on Saturday, notably in a sketch where he played a dancing caligrapher. Other unfunny sketches had him dressed as Casey Anthony's dog, playing a stock boy at a Target store, and kissing bums in a spin the bottle game.

In the requisite Harry Potter knockoff, SNL's cast did admirable imitations of the movie's cast, but then went nowhere much with the sketch, in which Radcliffe portrayed Potter as a pathetic, too-old hanger on at his old school.

Too bad he nixed a better parody idea in the opening monologue: Hairy Pothead. Maybe because that's the actual name of more than one comic book. Harry Pothead T-shirts have been seen with "and the Philopher's Stoned" on the back.

Seriously, SNL was much better when it was staffed by potheads.

Another actor from Radcliffe's generation, Elijah Wood (Frodo in Lord of the Rings) stars in the more interesting show Wilfred, where a talking dog gets him stoned and shows him the meaning of life. (Hint: it's not in a ring, a wand, or a broomstick.)

Where's the female connection? Rachel Dratch is widely acknowledged to be the top portrayer of Harry Potter on SNL, beating out Hugh Jackman and, it seems, Radcliffe as well.
Posted by Tokin Woman at 9:39 AM