Madonna Brings Back Baal at the Grammys 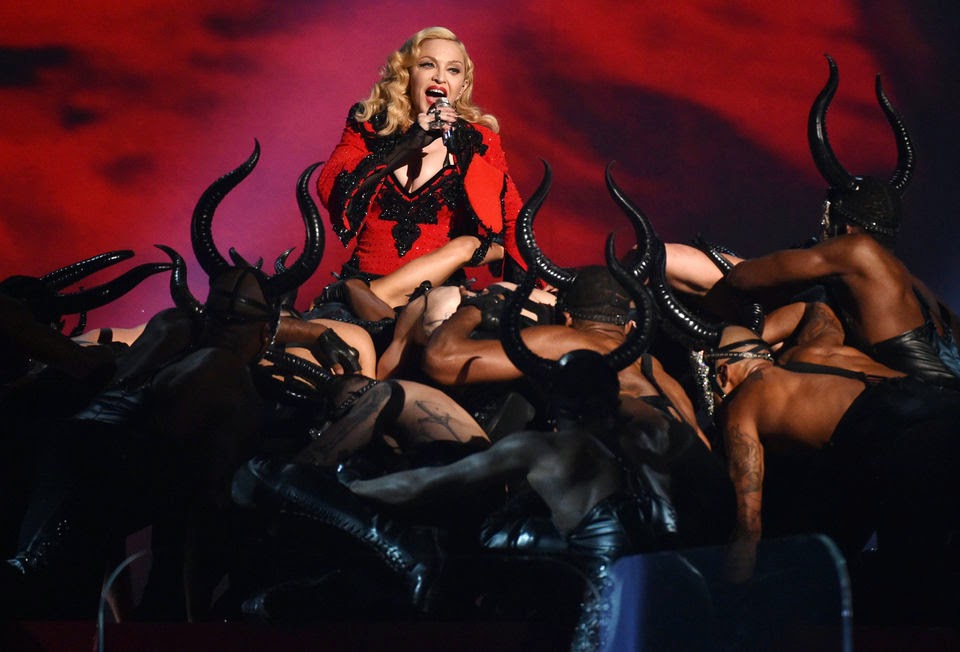 Madonna continued her pop culture interpretations of ancient myths last night on the Grammys, cavorting in a bright red bullfighter's costume with a herd of male dancers wearing bull horns on their heads. Some commentators recoiled at the "Santanic" imagery of the piece, and they're not far off.

Throughout the Old Testament, prophet after prophet warns the children of Israel that God will bring misery upon them unless they cease to burn incense to worship the god Baal. Some scholars think that the “burnt offerings” that were made to Baal and/or his consort Ashtoreth were cannabis, mistranslated as “calamus” from caneh bosm (sweet or good cane) in scripture.

Baal was depicted, in some regions, as a horned god, and his horns were adopted for the Christian concept of the Devil. Ashtoreth was the biblical name for Asherah (or sometimes Athirat) or Astarte/Ishtar, who was also depicted as horned.

In 1875 British General Charles Gordon, sent to suppress a Muslim revolt in the Sudan, wrote, “In the choice between God & Baal, they choose Baal.” He was beheaded by Muslim rebels (as depicted in the 1966 movie Khartoum with Charlton Heston as Gordon and Laurence Olivier as the Mahdi). Today we're obsessed with Balls.

Baal was also called Bel, a descendant of Belili, the Sumerian White Goddess. Jezebel, whose name means "where is Bel?" was a Phoenician princess in the 9th century who married Ahab the prince of Israel, but maintained her loyalty to Bel. To this day “a Jezebel” is a term applied to a fallen woman not to be trusted; it was the name of a Bette Davis movie wherein she betrays her fiancé by wearing a red dress instead of a white one to a ball. But the name's been resurrected as a hip website for women.

Excerpted in part from the forthcoming book Tokin Women, A 3000-Year Herstory from Evangelista Sista Press.