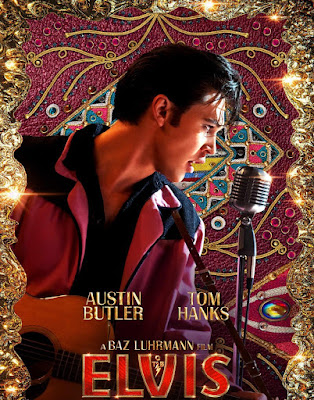 The new Baz Lurman movie “Elvis” gives inklings into what the star might have become without the influence of his manipulative manager “Colonel Tom Parker” (not his real name or rank), and the forces that demonized the singer for moving his body too freely onstage to the music he made.
Marijuana is mentioned in the film as Presley (Austin Butler in a pitch-perfect, career-making performance) begins to gain fame, and becomes controversial for his too-exciting performances. “The press says I smoke marijuana,” he says, implying it's untrue.
Just before that line is uttered, a still photo is shown of the real Elvis from a July 1, 1956 interview he did on the show "Hy Gardner Calling." On that program, New York Herald Tribune columnist Gardner asked Presley about his appearance that night on the Steve Allen show, something alluded to in the movie, with Allen requiring him to appear in a tuxedo and serenade a basset hound with “Hound Dog.”
Gardner asked Presley if he'd ever performed in a tuxedo before, to which he replied, “It's the first time I've had one on.” During the interview where he denied a connection between rock and roll and juvenile delinquency, Elvis was asked about the rumor that he had once shot his mother. “That one takes the cake,” was the reply.
Gardner then addressed another rumor, saying, “Several newspapers say that you smoke marijuana in order to work yourself into a frenzy while singing.” Elvis just laughed and said, “I don't know.” “You won't even bother answering that?” Gardner asked. No response, or denial.
Elvis's drug taking is briefly addressed in the film, starting with a fellow musician or manager offering him a upper to keep going on the road, something commonly done among artists like Johnny Cash, the Beatles, BJ Thomas, and others. Accounts differ as to whether Presley was introduced to uppers and/or downers during his stint in the Army, which the film presents as necessary to keep him from going to jail after causing a near riot over his performance in his hometown of Tupelo, Mississippi, or just as a way to make him look more like a clean-cut kid.
Presley's great debt to the black artists that preceded him is acknowledged in the film, with B.B. King, Little Richard, and Arthur “Big Boy” Crudup depicted, along with Big Mama Thornton, who first had a hit with “Hound Dog” (played by Shonka Dukureh) and the influential Sister Rosetta Tharpe, played by recording star Yola.
The film, a Lurmanesque tour-de-force with lots of fast cuts, split screens, and big glitzy numbers, is narrated by Tom Hanks as Parker, who engineered Elvis's film career and longtime residency in Las Vegas, taking (it has now come out) 50% of Presley's earnings.
"Elvis" presents Presley's “comeback” television special in 1968, taped just after Martin Luther King and RFK were killed. The special ended with Elvis singing a sparse and heartfelt version of “If I Can Dream,” a song based on King's “I Have a Dream” speech. It might have springboarded Presley to an international tour and a more meaningful career, had Parker (as the film tells it) not lured him to Vegas.

Thankfully, the 2-hour-and-39-minute film doesn't dwell on Presley's long slow decline, leading to his death at age 42 with multiple drugs in his system in 1977. And it doesn't cover the bizarre incident when in 1970 he met with President Richard Nixon to volunteer as a narc. "The narc badge represented some kind of ultimate power to him," Priscilla Presley wrote in her memoir, Elvis and Me. "With the federal narcotics badge, he [believed he] could legally enter any country both wearing guns and carrying any drugs he wished."

Elvis admired James Dean, who was a marijuana smoker. Two of Presley's girlfriends from his Vegas years tell different stories about him and marijuana. Cassandra Peterson, better known as “Elvira, Mistress of the Dark,” knew him when she was a showgirl; when she told him she smoked marijuana he told her never to do it again. But Linda Thompson, who was his girlfriend from 1972 to 1976, wrote in her 2016 kiss-and-tell book that Elvis did smoke for relaxation and for his glaucoma, and asked her to join him.
"Diamond" Joe Esposito, who met Elvis when the two were stationed together in Germany, was best man at his wedding and worked for him as his road manager and "right-hand man" for the rest of his life. In a 2002 interview, Larry King asked him about Elvis's drug use. Esposito responded, "Marijuana, we did a little bit. Yeah, we all tried that a little bit. I wish he would have stuck with just that."
A love scene in "Elvis" with Priscilla plays to Tokin' Woman Kacey Musgraves's version of "I Can't Help Falling in Love." The film ends with a heartbreaking, soaring performance of "Unchained Melody" from The Real Elvis just weeks before his death. Over the credits, his song "In the Ghetto" is played, reminding us what could have been and adding rap music to the mix, a Luhrman-style touch.
Posted by Tokin Woman at 8:14 PM