Musgraves Follows Her Arrow -- To a Joint and Two Grammys


UPDATE 11/19: Musgraves crushed it at the 2019 CMA awards, where she had beautiful things to say about the female creative spirit, and how the earth needs it right now, while picking up one of two big awards. She also dueted with Willie Nelson, and the evening's hostesses joked about her enjoying "Willie's Reserve":

UPDATE 4/19: Kacey Musgraves as Bongs: A Twitter Thread
UPDATE 5/18: Musgraves guested on "Hello Sunshine" with Reese Witherspoon, who said she loves "Follow Your Arrow" because it was the first country song she'd heard about alternative lifestyles.

Musgraves says one of the first songs she wrote after she moved to Nashville was "Burn One With John Prine."

UPDATE 7/15 - Musgraves has a new album sprinkled with pot references "like dab hits," along with a Willie Nelson duet, says CelebStoner. She will tour this summer starting July 9 in the US and UK.

UPDATE 12/14 - Adding to her award count, Musgraves scores a Tokey for Best Video from Tokin Woman. 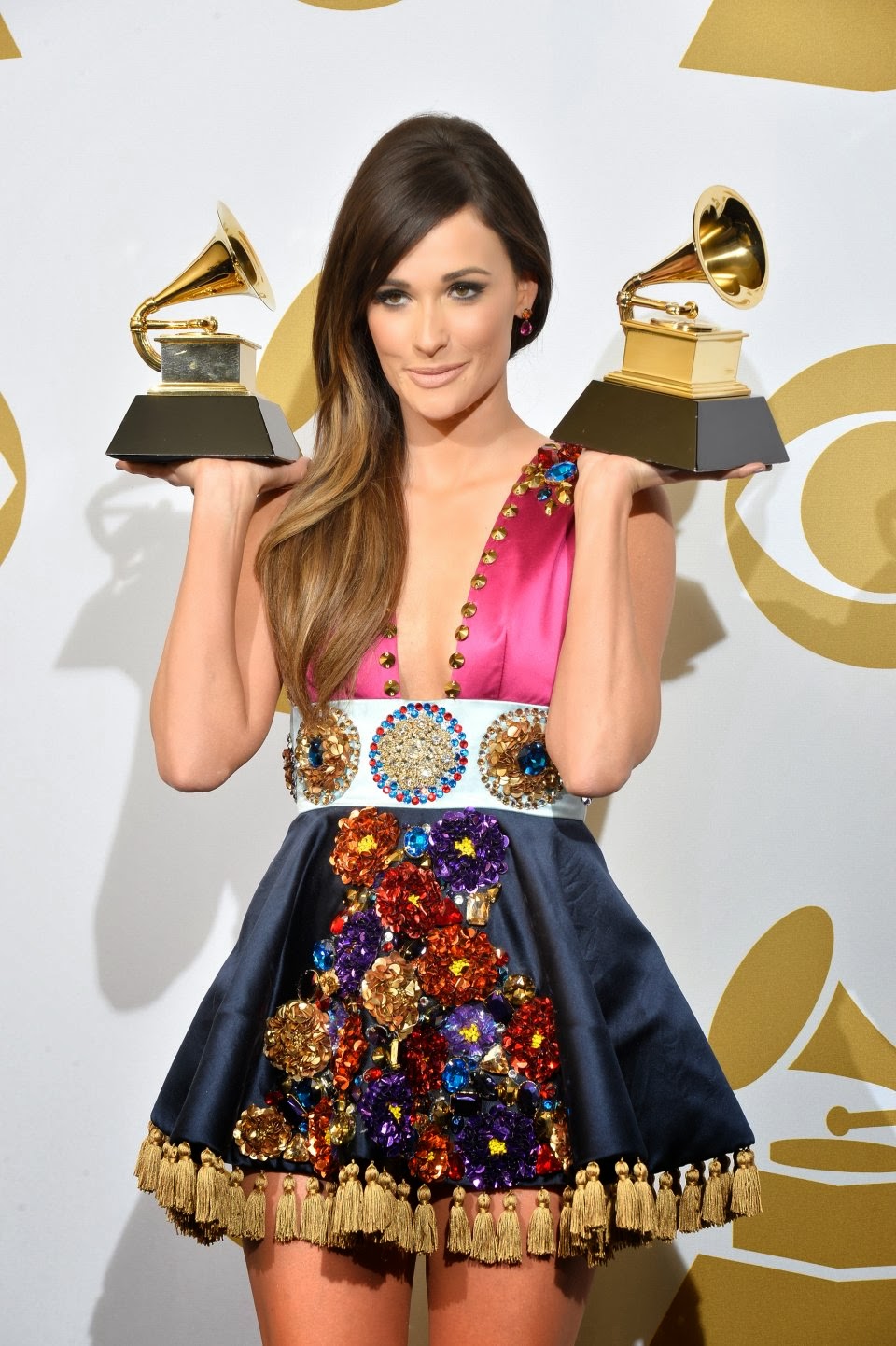 Singer/songwriter Kacey Musgraves was nominated for four Grammys this year and on January 26 she won two: Best Country Album ("Same Trailer Different Park") and Best Country Song ("Merry Go Round").  The 25-year-old newcomer performed the song she co-wrote with Brandy Clark, "Follow Your Arrow," on the nationally televised awards ceremony, with the lyric:

The fresh-faced Musgraves looks a lot more like Princess Kate than a stereotypical pothead. The video for "Follow Your Arrow" features Musgraves in Daisy-Duke-short shorts, a cowboy hat and toy guns, reminiscent of the act of VIP Candy Barr. Like Tokin Woman Besse Smith on her 1937 recording of "Gimmie a Pigfoot," Musgraves waits until the last verse to add her own reefer admission. She sang it with the "I would" on the show.

In March 2013 the Hollywood Reporter called Musgraves "The Weed-Smoking, Ball-Busting, Girl-Kissing Country Singer," and reported in 2011, when "she signed to Lost Highway Records, the boutique division of Universal Nashville...for left-of-center artists" she "was doing sit-down acoustic gigs" playing songs with lyrics like, “My idea of heaven is to burn one with John Prine.” (The first song on the first John Prine album was "Illegal Smile.")

"Mild evocations of lesbian smooching and marijuana may not seem radical outside the world of mainstream country," the Reporter continued. "But it seemed like a huge risk when Musgraves chose that song, of all the ones on her album, to perform at a UMG luncheon for hundreds of country radio programmers at Nashville’s Ryman Auditorium last month. Any doubts she had about performing the song disappeared when attendees started laughing uproariously after the first line and applauding furiously after the first chorus. Afterward, the radio types were all abuzz about what a brilliantly catchy and clever ditty it was… and how they could never play it on their stations." (Country fans: call your local stations and request this song!)

Musgraves' "Same Trailer Different Park" album jumped to No. 12 from No. 28 on the Billboard chart after the win. The "Follow Your Arrow" video has had 2 million views (see it below):