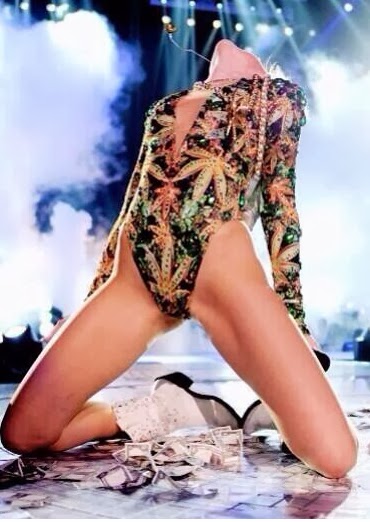 Miley Cyrus, recipient of the 2013 Tokin Woman "Blunt Move of the Year" award for toking up onstage at the European Music Awards, has tweeted out an interesting wardrobe choice (left) from her 2/14 Vancouver concert to her 17 million followers.

Perhaps celebrating the fact that the US government has issued regulations allowing marijuana businesses to open bank accounts, Cyrus then crawled around in piles of money, while wearing cowboy boots emblazoned with dollar bills.

As CelebStoner.com points out, Cyrus also has a marijuana-themed website for her tour. And yeah, she's still sticking out her tongue.

Cyrus will take the stage in Tacoma, WA on Sunday before traveling to California for shows in Anaheim, Los Angeles and Oakland.

The singer recently announced she was proud of herself for refraining from smoking cigarettes for the past two months.  "I just want it to be back to where it's, like, organic, good weed," she told Ronan Farrow for the March issue of W Magazine. (For that, she's touring in all the right places.)


Cyrus also tweeted a picture of a guy smoking a huge pipe with the hashtag #superbowl on February 3.