Pussy Riot Tries It (in the Netherlands) 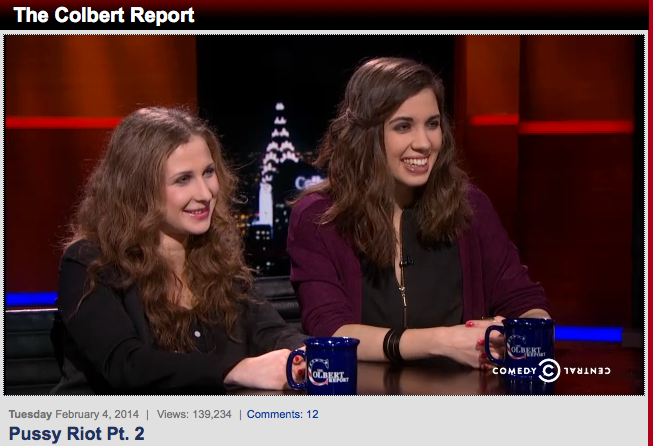 During a remarkable interview on the Colbert Report, Nadya Tolokonnikova and Masha Alyokhina of Pussy Riot talked about their release from jail in Russia and their tour of prisons in other countries, speaking out about human rights abuses.

"Yeah, we had a great time there too," Masha said knowingly.

"We sang a fun song in a church," was the succinct way the young women answered the question about why they were jailed. Among their fun songs, they said, was one called "Putin Piss Off."

The mock conservative Colbert joked he would edit out any parts of their interview criticizing his friend Vladimir. They responded, "That's OK, we're making our own taping right now." Told in that case they would be searched, they said, "We've had two years of practice hiding things from searches."

The women called their release a "public relations stunt" for the Sochi Olympics and called attention to the 12 people imprisoned after the May 6 protest in Bolotnaya Square, serving terms ranging from 5-6 years. "While this is happening, no PR stunt can fix Russia's image."

Watch Part One of the interview here, and their comments about the Netherlands below:
Posted by Tokin Woman at 11:48 PM