This is the 55th Anniversary of the Monterey Pop festival, which preceded Woodstock by two years as an epic rock and roll and counterculture event. Marking the first major American appearances by the Jimi Hendrix Experience, the Who, and Ravi Shankar, it was also the first large-scale public appearance of Janis Joplin and the introduction of Otis Redding to a mass American audience. Also playing at the three-day charity event were The Mamas and the Papas, Jefferson Airplane, Simon and Garfunkel,  The Grateful Dead, The Byrds, Buffalo Springfield, Canned Heat, Steve Miller and Laura Nyro, among others.

The D.A. Pennebaker documentary Monterey Pop is currently viewable on HBO Max and other platforms. In 2018, the film was selected for preservation in the United States National Film Registry by the Library of Congress as being "culturally, historically, or aesthetically significant."

Instrumental in planning Monterey Pop were Cheech and Chong producer Lou Adler and Tokin' Woman Michelle Phillips of the Mamas and the Papas, who has never shied away from controversy and speaking her mind about drug taking.

Asked on Bill Maher's Politically Incorrect in 1996 during a program on which Timothy Leary was scheduled to appear near the end of his life, "What was wrong with the brown acid at Woodstock?" she sweetly replied, "I don't know, but I was at Monterey Pop, and there we had Sunshine Owsley acid, and there was nothing wrong with that at all." (Owsley was the famous LSD chemist nicknamed "Bear" and the reason for bear imagery on Grateful Dead posters.) Phillips mentioned Tokin' Woman Candy Barr as also going to prison for a joint, as did Leary.

Nyro struggled with her Monterey Pop performance and her perception of the audience's reaction to it, and in her 1986 book California Dreamin': The True Story of the Mamas and the Papas – The Music, The Madness, The Magic That Was, Phillips wrote that afterwards, she took her into a limousine and "lit a huge joint and opened a beer and drove around for about 30 minutes, comforting her."

Interviewed by Regis Philbin upon the publication of her book, Phillips said, "The drugs were different than what we talk about today. When we took drugs we were taking psychedelics, and we were looking for a better place; we were trying to expand our minds and find religion. It was a different kind of experimenting." She also talked about her career move into acting, which she was successful at for many years. 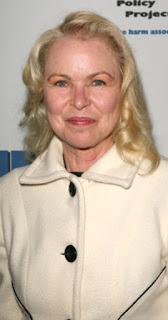 Phillips, who was busted for pot possession after a Texas traffic stop in 1987, later joined the Marijuana Policy Project as an advisory board member. “I think legalization could save the economy,” she said at an MPP benefit in 2008. “Imagine the windfall for the government if they could tax marijuana.” She also said it helped her quit (tobacco) smoking. “When I really, really, really wanted a cigarette, I would take a puff of pot, and the cravings would go away.”  On the Presidential race that year,  Phillips opined, “I’ve never met her, but I would say, ‘Hillary, chill. Smoke a joint.’ She’s got to get behind Obama.” (I said much the same thing.)

Phillips and Adler were interviewed on NPR upon the occasion of the 40th anniversary of Monterey Pop, and a "Monterey International Pop Festival – Celebrates 50 Years" was held at the same venue on the same weekend. Norah Jones, daughter of Ravi Shankar, was one of the headliners. In 2007 Jones told an interviewer, "I'm not a pothead, but, you know, sometimes. I don't smoke a lot, though, because I usually just fall asleep. And I get the munchies, but I don't have a problem with that. That's the best part."

The "Summer of Love" of 1967 actually started with the first rock festival held a week before Monterey Pop on Mount Tamalpais in Marin County, CA: the KFRC Fantasy Fair and Magic Mountain Festival. I got to attend the 50th anniversary of that event, featuring a performance of "Hair" and a set from a re-configured Jefferson Starship, with Cathy Richardson doing a great job belting out the Grace Slick vocals, and the crowd enthusiastically singing along to "Feed Your Head."

In Slick's painting Monterey, she is shown smoking at the festival with David Crosby and Jerry Garcia. Jimi, Janis, Cass Elliot, Otis Redding, John Phillips, Neil Young, Roger Daltrey & Pete Townsend are all depicted, along with Alice wearing a White Rabbit on her head. A pot leaf flies on a flag over a booth with the sign, "Hookas, Papers, Candles." A blonde standing next to Janis being handed a joint might be Michelle.

“Throughout history there have been delightful little blobs of collective hope,” Slick wrote. “For a couple of years in the late Sixties, no matter what was going on in the world, our generation happily assumed that with love and education we could change outdated social systems. One huge thing that we missed: Ninety percent of the population is genetically imbued with sub-mediocre reasoning skills. No matter how much you hug them or read to them, there’s no correcting stupid." Sadly, this seems more and more true.
Posted by Tokin Woman at 10:42 AM