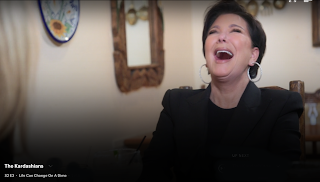 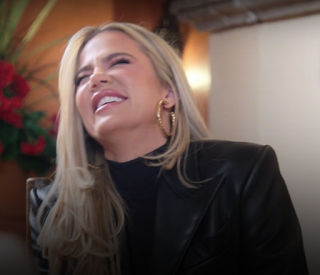 In the same episode Kim, who has worked for prison reform, took some food to her Supermodel sister Kendall, who recently came out as a stoner.

It's the second time Kris has gobbled gummies on TV. A 2014 "Keeping up with the Kardashians" episode shows her joining her mother MJ while they "try out some MJ" (also gummies) for pain relief. 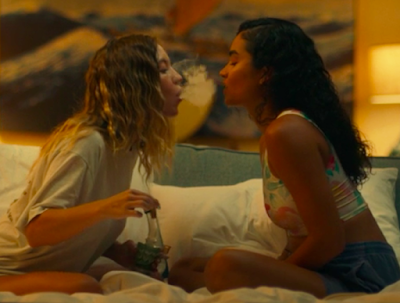 Meanwhile, in the award-winning HBO original series The White Lotus, two college girls (Sydney Sweeney & Brittany O'Grady, pictured) share a shotgun from a bong after they discover that between them they've packed weed, powdered ketamine, and several prescription medications for their trip to Hawaii. When they do the ketamine, things get trippy, but soon the hotel manager has stolen their stash and starts snorting it like coke to seduce a young employee. It's not the only thing that's creepy or disturbing about this series.
Sweeney has starred as Carrie in the druggy HBO teen drama series Euphoria since 2019. She was nominated for 2022 Emmys for both that role and for her performance in The White Lotus. I tried watching Euphoria but couldn't even get through the first episode wherein Sweeney's character has violent sex with an older man she meets online, and then cuts herself with a knife at a party. Series star Zendaya, who has won two Emmys for her role, explains in the series premiere that she was given liquid Valium to deal with a panic attack as a child, leading to her character's never-ending quest for euphoria, including buying designer drugs from a kid who looks 10 years old, being discovered unconscious by her younger sister, and procuring clean pee from a friend to fool her mother after she returns from rehab, all in the first episode.
UPDATE: In Season 2, Episode 3 of The White Lotus,  spoiled/vacuous rich wife Daphne (Meghann Fahy) shares edibles with her uptight/intelligent travel companion Harper (Aubrey Plaza), while their husbands get drunk and pick up prostitutes whose party favors include tabs of Molly in this increasingly male-fantasy-driven show. In an earlier episode, Ben Kingsley tries to tell his son and grandson that Demeter forgave Hades for raping Persephone when they visit the part of Sicily where the myth originiated (a ridiculous idea picked up as fact by Pamela Paul in the NY Times in an article examining the show's men (but not so much the women).
Posted by Tokin Woman at 1:59 PM