This year, I'm celebrating International Women's Day with a tribute to women who make things happen in the human rights realm.

My week started with the news that California Governor Jerry Brown said essentially on "Meet the Press" that "potheads" aren't productive members of the workforce and in this competitive world we can't afford to legalize marijuana.

I started designing an ad featuring productive "potheads" like Steve Jobs, Richard Branson, Carl Sagan and Barack Obama. Casting about for a woman to add to the mix, I hit upon the perfect addition in Jennifer Aniston. "I wouldn't call myself a pothead. I mean, I enjoy it once in a while. There's nothing wrong with that. Everything in moderation," Aniston told Rolling Stone in 2001, before it was vogue to make such an admission.

Commenting on anonymous reports in the tabloids about Aniston and then-husband Brad Pitt's "drug use," Aniston said, "You see something like that--me and my husband, hooked on drugs. Then you read the story, and it says you smoke pot. It's not even cocaine or shooting heroin. Pot!"

Obviously, occasional indulgence in marijuana hasn't impeded Aniston's career, or harmed her health. Her comments about moderation and the differences between hard and soft drugs are important messages seldom heard in the lock-step 'just say no' repression we live under. For this Aniston received the first "Outie" award, presented by the tongue-in-cheekly-named site www.VeryImportantPotheads.com. 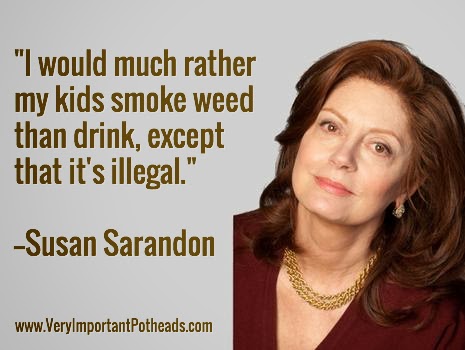 It hasn't been noted here that Susan Sarandon, a champion of human rights, has made some brave admissions of her own (right) in the new issue of AARP.  She's dating a younger man, dancing the night away, and still finding time to be a mother, a career woman, and a human rights advocate.

I recently saw the documentary PoliWood, exploring the role of celebrities in politics, and in it Sarandon asked the most intelligent questions of all. For giving us the pot-smoking savant Annie Savoy in Bull Durham, and for acting on her conscious conscience in all aspects of her life, Sarandon is celebrated here today.

I'd like to celebrate the difference one young woman made in her community of Shasta county, California and to acknowledge the work  Kerry Reynolds from KMUD radio is doing with her excellent weekly cannabis news reports and monthly Cannabis Consciousness show. Attorney Jennifer Ani is working tirelessly to protect mothers' right to raise their children, and another attorney, Kathleen Bryson of Eureka, California, is hosting an environmental forum for marijuana farmers today in Humboldt county. Diane Goldstein has been representing LEAP (Law Enforcement Against Prohibition) across California, and Cheri Sicard of LA NORML Women's Alliance has been highlighting people serving life sentences for marijuana.

Last but certainly not least, I'd like to mention the original, pioneering female cannabis activist Michelle Aldrich, who was featured in the Washington Post's remarkable article and video about the history of marijuana law reform. (The Post also recently reported on the "Mommy Lobby.") And here's a special shout-out to the Sacramento NORML Women's Alliance for their support of this project.

"Never doubt that a small group of thoughtful, committed citizens can change the world; indeed, it's the only thing that ever has," said Margaret Mead (who testified in favor of marijuana legalization in 1969 and said she'd tried it too).
Posted by Tokin Woman at 10:45 AM

Thank you so much for the mention. It means so much!
Jennifer Ani