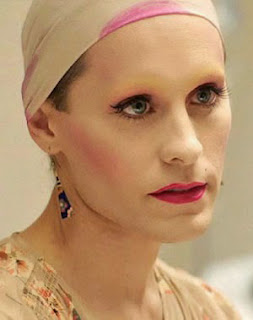 As expected, Jared Leto won the Best Supporting Actor Oscar for his portrayal of a transsexual in the "Dallas Buyers Club" (pictured). He thanked his mother, his date for the night.

"Thank you for teaching me to dream," said Leto.

When asked recently what was his favorite smell, Leto replied, "The smell of bonfires. And of marijuana. My mom's friends always smoked that."


Matthew McConaughey—who broke out in the stoner flick "Dazed and Confused" and arrested in 1999 for smoking pot and playing bongos in the nude—won Best Actor, also for "Dallas Buyers Club." The Best Actress awards went to Cate Blanchett in "Blue Jasmine" and Lupita Nyong’o in "12 Years a Slave."

Spike Jonze, who directed "Being John Malkovich" and produced "Jackass" won best original screenplay for "Her," about a man's relationship with an  operating system "designed to meet his every need." Thus faux women took as many Oscars as did real ones. 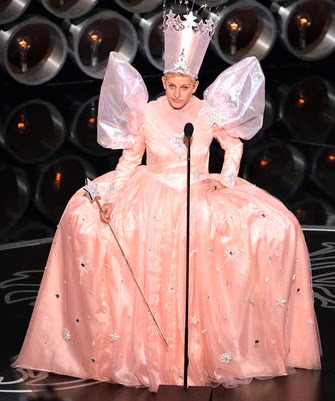 The event was hosted by Ellen DeGeneres, who recently Tweeted about pot being available in The Ellen Shop and told a pot joke the last time she hosted the show (and this year delivered munchies).

Pink did a fantastic job singing "Over the Rainbow" in front of images of the poppy fields and the Emerald City from The Wizard of Oz. In 2002, the singer-turned-mascara-model said, "I don't consider pot a drug. It's a plant. It comes from the earth. George Washington smoked pot." [Not necessarily true, but he did grow hemp and encourage others to "sow it everywhere."]

Female empowerment song "Let It Go," with the trippy lyric: "My soul is spiraling in frozen fractals all around" won best song. Bette Midler, who just played pot-loving Hollywood agent Sue Mengers in a one-woman play, sang "The Wind Beneath My Wings" for the yearly memorial tribute, which omitted screenwriter and drug war activist Mike Gray.

Angelina Jolie was given the Jean Hersholt Humanitarian Award for her "courageous, compassionate work" to aid women and children throughout the world. (She's smoked pot, but said she didn't like it.) "The Great Gatsby" won deserved Oscars for Best Costumes and Production Design; I think there was more to it than that.

Steve Martin, who "poked smot" with Meryl Streep and was "feelin' groovy" in 2010's "It's Complicated," received an honorary Oscar. He made no comment tonight like he did when he got the Mark Twain Prize for Humor in 2006, when he joked, ""If [Saturday Night Live producer] Lorne Michaels had told me I'd receive this award one year after him, I'd have said, 'Let me have a hit of that.'" When he appears with his Bluegrass band, the banjo-playing comedian jokes about the downside of touring without a drummer: "No pot!"

This was not the case for attendees, according to TMZ, which reported some LA cannabis delivery services had to hire more drivers to service the celebs during Oscar week. Portable vaporizers were particularly popular.

Leto said upon accepting his award, "This is for the 36 million people who have lost their battle with AIDS, and to those of you out there who have ever felt injustice because of who you are or who you love. I stand here in front of the world with you and for you."

Another Buyers Club connected with the AIDS crisis was Dennis Peron's Cannabis Buyers Club, which opened following San Francisco's passage of the first-ever medical marijuana law in 1992. We wouldn't have medical marijuana in California or the other 20 states where it's now legal if it weren't for AIDS activists who fought for their right to life-saving medicines of all kinds. A recent study found that, as with cancer, marijuana may not only help with the symptoms AIDS, it may cure it.