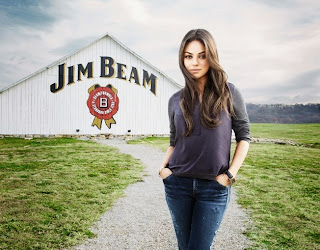 I didn't want to believe it, but it's true: Mila Kunis, who once played a girl that scored a bag of pot to impress a boy on "That '70s Show," is now stumping for Jim Beam instead of Mary Jane on TV.

According to AdAge Magazine, "While bourbon used to be consumed about 80% by men, the split is now closer to 70% male and 30% female, with flavored bourbon varieties nearly split down the middle."

This seems to be why the US's #2 bourbon brand has moved from spokespeople like Kid Rock to "the petite and beautiful Ms. Kunis, who is said to appeal both to men and to young women." In 2010, Beam introduced its first TV campaign for Skinnygirl, a lower-calorie, ready-to-serve cocktail line aimed at women, a trend that was lamented for health reasons in 2006 when "Sex in the City" was implicated in the increase in drinking among women.

You never saw the bong you knew was being passed around the basement circle in "That '70s Show," but now you can see Kunis enjoying her liquor on boob tubes everywhere. Liquor ads did not appear on any TV, national or local, for much of the 20th century, with the industry honoring a self-imposed ban from 1948 to 1996, according to AdAge. But a few years ago CBS began accepting liquor ads during late-night programming and ABC started running hard-liquor ads during "Jimmy Kimmel Live." In 2010, NBC began accepting spirits shows airing after 11 p.m. Eastern as long as 90% of the audience is of legal drinking age. (Industry self-regulations allow beer, wine or liquor ads only on programs where at least 71.6% of the audience is 21 or older.)

Meanwhile, state law in Colorado forbids legal marijuana stores from advertising on media where more than 30 percent of the intended audience is younger than 21, even though it's the safer substance; and a Weedmaps ad has been pulled from Times Square. Adding to the irony, Kentucky, where Jim Beam and the Kunis commercials are made, was once better known for hemp (Mary Todd Lincoln's ancestors were prominent hemp farmers there). And one of the new Jim Beam ads features a reference to Prohibition (also the wrong one).

UPDATE: One reader points out this story is even stranger because Kunis is pregnant (and showing quite a bit at this point, in paparazzi pics of she and fiancee Ashton Kutcher visiting the Abita Brewing Company in Louisiana where all "enjoyed sampling the beer—except mom-to-be Kunis, of course." Source) By contrast, cannabis is perhaps beneficial to pregnant mothers.