UPDATE 4/19 - Letters from Baghdad, a terrific documentary on Bell that was executive produced by Tilda Swinton, who gives voice to Bell in the film, is now on Amazon Prime.


UPDATE 7/15 - The trailer for the Werner Herzog-directed film Queen of the Desert starring Nicole Kidman as Gertrude Bell with James Franco and Robert Pattinson looks fairly true to life. The film will be out this winter, and Kidman is on the cover of Vogue this month with a photo shoot inside inspired by her role. 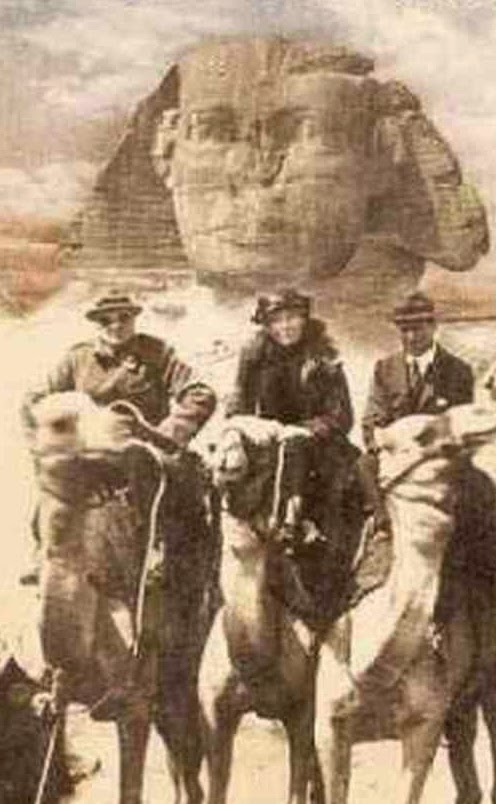 A spirited and brilliant child whose grandfather was a railroad magnate, Gertrude Bell earned a college degree in history with honors in only two years and became a serious student of Arabic. She fell in love with a young officer who read her Hafiz, the Sufi poet, but her parents refused to allow them to marry.

She never married, but she did publish a translation of Hafiz. Coached by an uncle who was the British Minister in Tehran, Bell took many adventurous quests through Arabia, meeting sheiks who treated her like a visiting queen.

Pictured here with Winston Churchill on her right and T.E. Lawrence (a.k.a. "Lawrence of Arabia") on her left, Bell was a mountaineer and a self-styled diplomat, later a spy, who was instrumental in drawing the current borders of Iraq and establishing the Iraq Museum in Baghdad. The 1997 film The English Patient makes a reference to a Bell map (incorrectly identifying her as a man).

Gertrude Bell: Queen of the Desert, Shaper of Nations by Georgina Howell says of Bell, "Her Arabic had become good enough for her to discuss desert politics with notables she met long the way. She began to take her turn with the narghileh that was passed around as they talked, the bubble-pipe in which tobacco, marijuana, or opium was smoked. She did not enjoy it at first, as she was at pains to tell her parents, but gradually acquired the habit."

In February 1914, Bell wrote a letter recounting this legend she heard during her travels in Arab lands: "There were three men, one drank arak [a distilled alcoholic drink], the other wine, and the third hashish. And when they rose to go out of the house they looked at the door. And the Father of arak said, 'It is great as the door of a khan, we can never open it.' The Father of wine said, 'It is open and the flood of a river is flowing through, we cannot pass.' But the Father of hashish said, 'Then we must climb the wall.' And he climbed the wall and dropped into the street." It's possible the men who told her this story are in this picture Bell took at the same time.

Bell was not the only Englishwoman to travel in the Orient at the time, or to taste the hashish. Mary Eliza Rogers, who traveled with her diplomat brother in Palestine and Syria, wrote  in Domestic Life in Palestine of taking a meal at a harem, after which chibouques and narghiles were brought out: "After Helweh had smoked for a few minutes, she inclined her head gracefully, placed one hand on her bosom, touched her forehead with the pliant tube, and then handed it to the lady sitting next to her, who happened to be the second wife of her own husband, Saleh Bek. Thus it was transferred from one smoker to another, even to the handmaidens, with the words, 'May it give you pleasure.' This politeness and ceremony is strictly observed among the Moslems even between the nearest relations. The prescribed forms of greeting in habitual use, appear to me to have the effect of keeping comparative peace and harmony in the harims."

Later in life, Bell wrote, "Some day I hope the East will be strong again and develop its own civilization, not imitate ours, and then perhaps it will teach us a few things we once learnt from it and have now forgotten, to our great loss." Facing old age with little income, and possibly cancer, Bell died of an overdose of diallylbarbituric acid (aka allobarbital or Dial) two days before her fifty-eighth birthday, writes of of Arab women "shotgunning" Jewesses on their sabbath, so that they might also enjoy themselves.

In 2013, it was announced that Angelia Jolie was slated to portray Bell in a biopic directed by Ridley Scott (but Nicole Kidman directed by Werner Herzog will do just fine).
Posted by Tokin Woman at 12:05 AM