What Were the Addams Family Smoking? 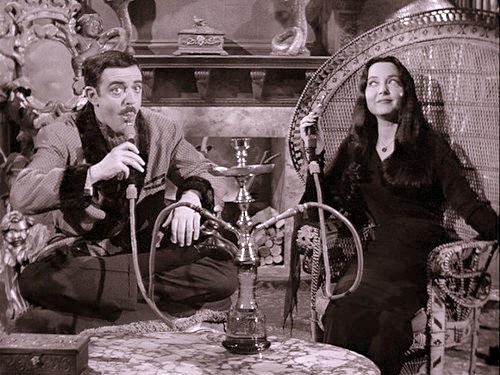 From my youthful TV watching, I seem to recall Morticia (Carolyn Jones) and Gomez (John Astin) of "The Addams Family" (1964-66) smoking regularly from a Turkish hookah. One researcher claims the hookah was scrubbed from later re-runs, but I've found this video showing them smoking:

Based on a series of New Yorker cartoons by Charles Addams that debuted in 1938, the TV series is enduringly popular in reruns; an animated series (starting with an appearance on Scooby Doo in 1972) followed, as did two films and a musical.

Despite being offbeat and morbid, the Addams Family were loving and accepting. Just like pot smokers.

A hookah also appeared regularly on the TV series Bewitched from the same era, smoked by Endora and Dr. Bombay.

Love it! Gomez and Morticia are such a great couple :)

I thought the same thing. I loved that they and Mannard Krebes, the beatnick on 50's Dobbie Gillis, were alternates. A lifestyle choice! I was sure once I hit 17 that they were smoking the pot. I love that they did that. Thank you for that pleasure of reading. PpP! Toke of the eve to you!